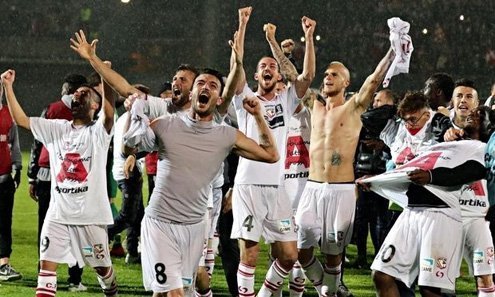 Joyous Carpi players after the team clinched a berth in Serie A.
I

f you bring me two teams that aren’t worth a fuck, in two or three years we won’t have a lira left… in three years if we have Latina or Frosinone, who the fuck will buy the [TV] rights?” The man who spoke these vulgar words is Claudio Lotito, president of SS Lazio and a Serie A counselor to FIGC, Italian football’s governing body.

In February, a recorded phone call was leaked in which Lotito offensively rued the prospect that Latina, Frosinone, and Carpi — three of Serie B’s smaller teams — might be promoted to the Italian first division.

Three months later, and Lotito’s worst nightmares came true. In mid-May, Frosinone clinched second place in Serie B, securing automatic promotion along with Carpi, crowned champions in late April. It will be both clubs’ first venture into the top tier.

Why the hatred from the Lazio boss? Carpi, population 70,000, and Frosinone, population 48,000, are provincial towns without any football legacy. All three will struggle to deliver TV rights revenue to the league and its other teams, Lazio included. Their following is admittedly miniscule. Frosinone home games drew an average of 5,200, Carpi averaging 2,700, the third lowest in Serie B despite the team winning the title.

Italian football has seen a number of provincial ascents in recent seasons. Carpi and Frosinone join Sassuolo and Empoli, existing Serie A team towns with less than 50,000 residents. Small town clubs are comparatively rare in other major European leagues. Burnley, the smallest city ever to be represented by a Premier League club, has a population of 73,000. Eibar contested this La Liga campaign with a population of 27,000. They’re the only comparable clubs in their leagues, and were both relegated at season’s end. Germany has one major outlier: Hoffenheim, a city of 3,000 people whose team plays its home games in nearby Sinsheim (population 36,000). But unlike Italian football, the tiny provincial club is more exception to the rule than an emerging trend.

However, just as this wave of small Italian clubs lowers the short-term revenue ceiling, there are plenty of reasons to sidestep knee-jerk reactions like Lotito’s.

Clubs like Carpi, Frosinone, Sassuolo and Empoli have been capably run. One would struggle to find a player on Inter or AC Milan’s bench who was purchased for less than €3 million, the combined salary of Carpi’s entire first team.

The two Milan giants are currently paying the price for decades of over-spending, while medium-sized clubs like Bologna, Bari and Brescia have spent the last five years racked with debt, mismanagement and presidential musical chairs. Their failures have paved the way for the smaller clubs to thrive with a workable economic model, a template that larger clubs would be wise to borrow from.

Since UEFA Financial Fair Play came into effect in 2011, it’s been impossible to just spend your way to the top. While Hoffenheim accrued losses of €65 million between 2007 and 2009 in reaching the Bundesliga, Italy’s table climbers couldn’t spend such sums.

There are also geographical trends. Emilia-Romagna is famous for the district economic model, in which neighboring towns are characterized by small and medium businesses, with each highly specialized in the production of particular goods. Carpi and Sassuolo are leaders in clothing and ceramic tiles, respectively, and separated by a short 30-minute drive.

Both clubs are tied strongly to their local business community. Carpi president Stefano Bonacini owns clothing company Gaudi, while the team’s shirt sponsor is Blumarine, whose stores dot the Far East and generate more than €100 million in yearly revenue.

Sassuolo owner Giorgio Squinzi, while not a local, does own the building supply empire Mapei, in synch with the town that produces 80 percent of Italy’s ceramic tiles.

Mapei is the shirt sponsor of Sassuolo, also lending its name to the stadium. Squinzi bought Stadio Città del Tricolore when Sassuolo were promoted to Serie A, making it one of the only privately owned football stadiums in Italy.

Though Mapei Stadium is more functional than fancy, the fact that it’s relatively new (1995) and private is important to the match-day experience. Box seats, close field proximity, and the ability to quickly upgrade amenities set it apart from Italy’s fleet of outdated, rented, and deserted stadiums.

Sassuolo’s situation also offers the intriguing possibility of growing a base from a next to nothing, one that’s also relatively free of extremist fan groups whose forays into violence can drive casual fans away.

But the biggest reason to support the Carpi’s and Sassuolo’s of the world is that they’re Italian. Unable to splash on foreign imports, the four sides in question have worked to develop young Italian players.

As the prestige and economic clout of the Serie A has eroded over the last five years, the chorus of reactionary voices has grown. These voices blame poor performance of both Italian clubs and the national team on the influx of foreign players.

Concealed behind Tavecchio’s bigotry was a valid question: with successive World Cup group stage knockouts, where are all the exciting young Italian players?

With Carpi, Frosinone, Empoli and Sassuolo, perhaps we can begin to find out.