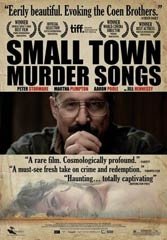 In a rural Canada’s German Mennonite country, veteran local sheriff Walter (Peter Stormare), a lawman long beset by personal demons, is forced to reckon with the body of a dead woman discovered by a lake. The case turns all the more complicated when it comes clear that a leading suspect is the man who now lives with the sheriff’s former lover Rita (Jill Hennessey), a smoldering entity he still adores. From this uneccentric premise, writer-director Ed Gass-Donnelly constructs a kind of Gregorian chant that focuses less on the vagaries of the case itself, which is handled by Ontario detectives, than with the once-violent now reborn sheriff. Tormented, he fumbles for redemptive restraint in circumstances that beckon revenge.

Gass-Donnelly uses the searing music of Canadian indie band Bruce Peninsula and Swedish-born Stormere’s slow simmering to build a Lars von Trier-styled ode to faith through sublimation. Though Gass-Donnelly divides the narrative into three sweeping scriptural chapters, the action that counts is internal. The film’s heft and credibility depend entirely on Stormare’s moral navigation. An underrated actor whose face is a pent-up tone poem to impending fissures, Stormare’s Walter keeps up his end of the bargain. So does Bruce Peninsula, whose rock gospel thumping gives the downbeat mood a heartbeat (the title “Small Town Murder Songs” includes songs for good reason).

All that said, it’s very much style over substance, something that becomes painfully clear when the film cuts out after a mere 75 minutes.