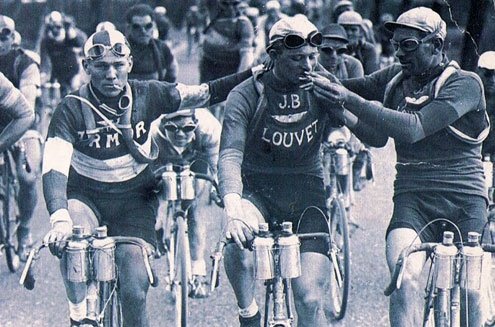 The epitome of coolness, in the 1920s, was smoking during the Tour de France.
S

itting on the patio at Philz Coffee in San Jose, California again reminded me why I like Northern California so much. At home in Seattle it was probably cloudy and on the cool side. In San Jose it was a lovely 75 degrees under a cloudless sky. Above me a woman sat on a veranda painting the coffee hounds below her, me included. We sat blissfully drinking, reading, talking, writing — mostly unaware that we’d become the subject of a painting. I wished I could join her but I kept my head down and my eyes focused on my computer.

The clicking of a lighter turned my head, reminding me of a childhood time in which both my parents smoked. My father once had a silver Zippo-style flip top lighter that when flicked open made the faint but distinct sound of metal to metal. I’d catch myself staring.

I stared a lot as a child and I was constantly being told to stop. I remember once sitting in my father’s car — I must have been about 13 — as he pumped gas. But I wasn’t watching him. I focused instead on a couple talking and smoking outside the corner store. That’s when a knock came on the window. “Stop staring!” my father mouthed, looking annoyed.

But I liked studying people. I didn’t judge then and I don’t now. I’m interested in how they move, how they speak, and what they wear. It explains my love of figure drawing, which allows you to stare without being frowned upon. My interest in watching and listening hasn’t changed over the years. It’s just less blatant.

Back in San Jose, I was distracted by the smell of tobacco. Turning my head slightly, I saw two men, one blond, a second dark haired, each one lighting up a Lucky Strike. I was predictably enthralled. Neither smiled. Instead, they just sat there staring at nothing.

The blond had messy, disheveled hair, a retro grey sweatshirt, brown dirty cords and worn out vans. The brunette was more like Eddie Cochran with his pompadour hair. He wore a Mr. Rogers cardigan, tight cut-off denim shorts, black socks, black dress shoes and old-school Ray Ban glasses. They were the cool kids I never was.

I pretended to write while stealing glances as the men sat silently holding their cigarettes and drinking their coffees. When I say holding I mean it literally. Between the two I counted four drags. I was disappointed since I like the way cigarettes sit on lips of smokers, their throats moving when they inhale and exhale, some half-closing their eyes each time they breathe in. The men took great joy flicking the ashes on the pavement when the tips grew too long. I detest the taste of cigarettes but I found myself wanting one for no other reason that to coolly flick the ashes under the gaze of the painter on the veranda above.

After stabbing out the cigarettes out on the metal chair legs, the men began an exchange, with each subject getting a few random remarks. It went something like this:

“Chase treats woman so shitty. Last night when I asked him if he were really into Lauren he said, ‘She’s okay.’ I told him that when he’s dating a girl, he should at least f***ing think she’s everything.”

“He has no respect for women. He really pisses me off. It’s my life dream that on his deathbed, I’m gonna go visit him, gently lean down to his ear and whisper, ‘I f***ed Jade when you were dating her.'”

“He just has no respect for women”

“Is it illegal to be naked in your yard?”

“I wanna lounge naked in my yard.”

“This morning I made a peanut butter and jelly sandwich and got it all over my shirt. Look.” (silence).

“So what’s the attraction to it?”

“I gotta go, where you parked?”

“Over there. Wanna ride?”