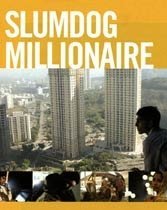 Strip the exoticism from Danny Boyle’s gorgeously visual machine gun and you get an Oscar-winning American Dream story by way of Indian squalor. Though Boyle goes wholesale for India he could have picked China or Nigeria. The story: A doe-eyed teen and former slum-dweller is poised to win a 20 million rupee jackpot on India’s version of “Who Wants to be a Millionaire.” How’d the call center employee get there? An American rags-to-riches version would involve the urban jungle (or white trash roots), a loutish family, crime, a love interest and means to rehabilitation. Global Village-speaking, why should India be any different?

The answer is the level of destitution, which Boyle adroitly plumbs in the first hour of what feels more like a Gothic horror film. His Bombay-Mumbai as lived by brothers Jamal and Salim (and girl sidekick Latika) is as jagged-edge nasty as anything the director has gnawed and spit out on since the 1996 “Trainspotting” (though he warmed up in parts of “28 Days Later”).

Unspeakable poverty and violence — physical and emotional, all of it highly kinetic — are the centerpiece of this Dickensian poetry, with the story-line hewing to an throbbing, incantatory soundtrack. It’s a first half intended to throw Westerners on the defensive, revving up the layers of surreal destitution until there’s literally no way out. The reason for this, ostensibly, is to explain why Jamal keeps getting the game show questions right — he’s learned life’s lesson the hard way, and they’re harder than the West’s worst nightmares. Not even the police, interrogating him on suspicion of cheating, are convinced. So Jamal keeps spewing flashback perdition.

But having set up such a thrilling premise, Boyle leaves himself nowhere to go. Since the start relies on the flashback trick, the present has to catch up. When it does, Boyle goes soft. He lampoons Bollywood and reinterprets “Fame,” in which caste society plays the part of New York High’s School for the Performing Arts. The spectacle, and the story, lapses into caricature, with long-beloved Latika adding to the baggage. While these contrivances torpedo the film’s gravitas they don’t slay Boyle’s cherished hard-stuff. He energizes the gap between affluent aspirations and slum-life confusion. Those who call this “poverty porn” forget the rabid brio applied to the Vietnam War in the late 1970s and 80s (“Apocalypse Now,” “Full Metal Jacket,” “Platoon,” and so on).

The mostly Indian cast is creditable all around (Dev Patel and Madhur Mittal as the adult Jamal and Salim, respectively) with Anil Kapoor as suitably sleazy show host Prem. But this is not a movie about acting or actors. Boyle is determined to redirect rags-to-riches, or at least suggest how the indescribable can be coddled into the mainstream, and India obliges by being India. All the rest — tragedy, corruption, redemption, family ties — is secondary.