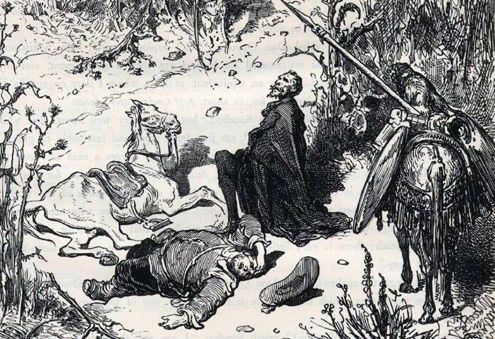 “I lie awake while thy sleepest,” said Don Quixote to Sancho Panza.
I

f it were up to my boyfriend’s mother, Fabio would always be sleeping. If you didn’t know better — and I do — you’d think the man was sleep deprived. At least that’s what his mother likes saying. Particularly when he finds himself in her Calabrian backyard for work.

When I call, she makes her presence known in the background. “Mio povero figlio,” she announces. My poor son. “No one works as hard as he does! Why don’t you go to sleep?”

I recognize that the boy needs his sleep in between his busy work schedule. So, being the good girlfriend that I am, I ensured our weekend wedding planning appointments in Rome were set at a “decent” hour, which is to say afternoon. Anything before that time Fabio just won’t function.

Our first appointment was with Mr. Rossini at a restaurant in the centro storico at about Noon. So when 11 a.m. rolled around and Fabio lay in bed comfortably I started getting antsy.

I did my best to remain calm, cool and collected.

“Pazienza,” I repeated over and over in my head.

Then his mom called. “What are you guys up to?” she asked. Nothing really. Fabio’s sleeping, I told her. “Aw poverino,” she said. “Shh. Shh. Let’s make sure not to wake him up.””

Not wake him up? It’s almost lunchtime. No use. So I agreed and hung up.

As Fabio gradually roused himself, I calculated that it would take us about 20 to 25 minutes on the motorcycle to get to the center, assuming no bad traffic. Factor in parking and we’d be there just in time.

That in turn would give Fabio just enough time to wake up thoroughly, have his cappuccino and read the first couple of paragraphs of the Gazzetta dello Sport to see what they had to say if anything about “Il Grande Milan.”

That’s the way I imagined it anyway.

But after the cappuccino and first few paragraphs of his sports paper, he decided to call his friend Ciccio. You should know that Fabio and Ciccio speak regularly, as in four or five times a day… just about soccer. In case one or the other happened to miss out on the day’s calcio news. God forbid.

My luck would have it that their “update” happened just before we needed to get to Mr. Rossini. I pointed at my watch.

He shot me a look and gestured. Obviously Mr. Rossini would have to wait. There was important Milan news to be discussed.

He obviously had no idea that when it comes to weddings, the Mr. Rossinis of the world mean business. At a dime a dozen, they could care less whether you’re late or not. With or without your business, someone’s getting hitched at their restaurant, so they’re not exactly falling at your feet.

Fabio ended his conversation and off we headed for the city center on our Harley named Mildred.

Smooth sailing? Not a chance. A massive demonstration had the city center paralyzed. Which soured Fabio’s mood.

“Non ci posso credere!” he said. He couldn’t believe it.

“Just our luck, on the day of our wedding, some massive protest will probably make everyone late to the ceremony!”

We missed our first appointment, and our second one was hardly a breakthrough. Secretly, I think all Fabio could think about was sleep and Milan.

But one thing’s for sure: He’s decided whatever arrangement I pick is fine with him so long as it’s 1. Outside the city center and, 2. In the late afternoon. That way he can catch up on his beauty sleep.