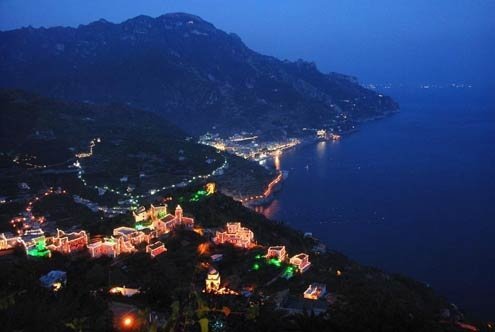 Nighttime on the Amalfi Coast, as seen from Ravello. Why rush?
I

was dining with my mother in Ravello, sipping wine and looking out over the glittering nighttime panorama of the Amalfi Coast, when a group of Americans sat down near us and ruined the mood. The travelers gave a perfunctory glance out the restaurant’s floor-to-ceiling windows and quickly began advising each other on the best sights, emphasizing how much certain Amalfi Coast towns had changed since their first visit in the 1980s. Next came seasonal advice. “You know when would be a great time to go to Amalfi? December,” said one man. “You don’t want to be anywhere near it this time of year.”

It was June at the time, and my mother and I had just returned from the town of Amalfi. Contrary to the man’s insistence, the crowds weren’t unbearable and the visit pleasant.

But I wasn’t thinking about Amalfi at the time. My gaze was focused instead on the sea and sky of Ravello. As my compatriots ticked off their immediate and future travel plans, I began wondering why their incessant travel talk was displacing the stunning, and obvious, view.

This happens to me now and again in Italy, particularly when I encounter groups of Americans. I used to be as they were — rarely living in the moment, always focused on an itinerary. But overhearing the Ravello chatter marked the first time I realized how much I’ve come to adopt an Italian attitude toward travel.

It’s impossible not to notice the different vibe given off by a tourist destination when it’s filled with Italians instead of primarily Americans. Rarely does anything seem urgent (despite what may seem like a uniquely Italian penchant to jump in front of others in line). The spotlight is generally on relaxation and enjoyment, rather than sightseeing to the point of exhaustion.

This difference couldn’t have been clearer than on a recent weekend in Capri. I’d long abhorred the island’s main town square, even though island guides have long touted the piazzetta as a top people-watching spot. During my daytime stops I’d noticed only overpriced (and burnt) espresso along with day-trippers scurrying around in hurried spurts before abruptly stopping to figure out where they were. But by night, after the foreign tourists left, the square came alive with Italians cooing at babies and lounging amid the clink of aperitivi glasses.

Naturally, Italians feel more at ease traveling in their own country, but what about abroad? Do they then become stressed and harried? Apparently not. A tour guide in Marrakech, Morocco (a popular winter travel destination among Italians) recently gave me his take on Italian travel habits. “Italians don’t care about history,” he said as he ushered my husband and I between mosques and palaces. “They have too much history of their own.” Italians, he told us, had an affinity for Hammams (Turkish baths), mint tea and souk shopping. Americans, by contrast, were determined to see every palace and garden.

While Italians certainly don’t ignore historical sites while traveling, my sense is that they feel no obligation to do anything specific. Guilt is not part of an Italian vacation. Few are the Italian travelers to a place like Paris that will later regret having made it to only one church instead of three. Not if they thoroughly enjoy the other aspects of their trip.

But there’s a caveat. Shrugging off a museum or castle or two is easier when you live two hours by plane away from countless European destinations. For Americans, traveling across the Atlantic is expensive, and in some cases is a once or twice in a lifetime adventure. By contrast, most Italians don’t go to Paris or London just once. Moreover, Italian culture is looser with vacation time — usually two to three weeks in August — while most Americans are often forced to cram an entire European tour into two weeks, a nearly impossible feat.

Still, I’ve come to see the benefits of a more relaxed style of travel. The less I schedule, the more my travels actually rejuvenate me instead adding stress and leaving me more exhausted than when I left.

I try encouraging my American friends and relatives to slow their pace when they come to visit me in Italy, with mixed success. Some have been unwilling to take a break between visiting Rome’s Coliseum and the nearby Roman Forum (“It’s right over there!”) and ended up trudging through the latter looking like dehydrated zombie. Others use the opportunity to caffeinate and ramp up for further adventures, only to crash later.

I’ve made both mistakes myself in the past. But that was the old Melissa, the one who hated beaches and preferred walking to taking a taxi, even if her feet bled.

Now that I’ve experienced the Italian piano, piano approach – literally “slowly, slowly,” but more like “one small step at a time.” – I doubt I’ll ever be able to go back to my old ways. In fact, you’ll find me spending the Italian August holidays doing what I once thought was unthinkable: relaxing by a pool, doing nothing in particular.