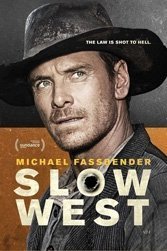 John MacLean’s odd but engaging Western tells the story of Jay Cavandish (Kodi Smit-McPhee), an upper crust Scottish teen who in 1870 troupes Westward Ho in search of his peasant-girl true love Rose (Karen Pistorius), who’s fled Scotland for the homestead life in America with father (Rory McCann) after a dispute leaves Jay’s father dead. In the Colorado territories, Jay comes across Silas (Michael Fassbender), who ferries him toward the father-daughter. What he doesn’t know is that Silas is a bounty hunter after the $2,000 reward on the Scottish duo’s head. Along the way, the odd couple meets a satchel of eccentric figures — philosophical outlaws, laconic injuns, West African musicians, armed and wandering families — all in the thrall of the region’s shoot-first primitivism. “In a short time, this will be a long time ago,” a writer chronicling the “aborigines” tells Joey along the way. But a long time will be a short time for Joey, since thunderstorms and bloodbaths loom – the climax handled with awkward beauty.

New Zealander MacLean is true to the slowness of his West, inching his men forward (Fassbender looking like a kind man’s Clint Eastwood). But Maclean also possesses moody, bizarre touch, merging aspects of the work of Sam Peckinpah, Jim Jarmusch and Wes Anderson. This is a little movie that gradually sheds its slightness, leaving a sweet, sad and moody mark.