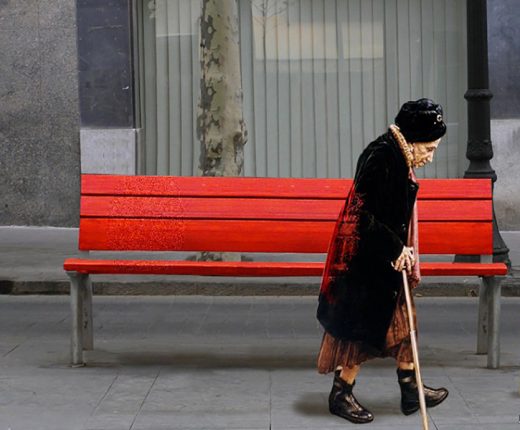 In Manciano, age is governed by the theory of relativity, minus Einstein.
I

came home last week to my elderly neighbor giving her friends a tour of our newly renovated downstairs apartment. And no, I had not let her in.

She looked me in the eye and said, “You took a cellar and transformed it into a house. Looks nice, but you spent too much money.”

As all clichéd Italians do, she used her hands to emphasize the point. She then tucked her light brown purse closer to her chest and led her friends back down the alley.

I stood there trying to figure out how she’d managed to enter my house. I wanted to ask whether she hosted such tours regularly while I was away at work. I wondered whether she charged an admission fee. I started thinking that she had her own key. Over the next week, every little thing I found out of place I took as proof she lived here when I wasn’t around.

I must have stood there for a good 10 minutes imagining all the hijinks my 80-year-old neighbor got up to in my apartment. In my head, I was watching “Home Alone” with a much older and female version of Macaulay Culkin burdened by a bad hip. They have the same haircut.

There was a traffic jam a couple of weeks back. I thought a car had broken down. Instead, a 90-year-old man without a license ran over a 90-year-old woman on a pedestrian crossing as she was shuffling to the shops.

The woman’s husband, rest his soul, used to love prostitutes. He stopped going when he was too old to perform, but then Viagra hit the Italian market and he returned to his hobby with renewed vigor. Then he ingested enough Viagra to kill a horse, had a stroke, and had to be cared for by his wife for another decade before finally meeting his maker.

There was a traffic jam a couple of weeks back. I thought a car had broken down. Instead a 90-year-old man without a license ran over a 90-year-old woman on a pedestrian crossing as she was shuffling to the shops.

His wife was the unfortunate nonagenarian in the traffic accident. I’m not telling you this story because I like to gossip. This is verbatim the story my husband Giulio told me when he was trying to explain who got hit. I didn’t (and still don’t) know her name, but I could put a face to the story. It’s been making the rounds in Manciano since the 1980s.

Imagine being defined by your most embarrassing moment. Remember Giuseppina from my column-worthy cast of locals? No? When she had a child out of wedlock, her mother decided to portray the baby’s daddy as a monster, claiming he’d pushed her daughter down a flight of stairs and broken her arm.

So what happened to Giuseppina? She just had another baby with the same man.

Most of us entertain the fear that the things we put on social media will eventually come back to bite us in the ass, but in small town Tuscany there’s no need. Everyone already knows what you did and passes it around. Everyone has a label.

My husband Giulio is the upstart who got trounced in the local mayoral elections.

My father-in-law is the man who almost burned down the town when a modest fire made from olive branches blew out of control.

Our former priest sometimes overindulged on church wine and delivered one too many homilies with extra gusto. He shouldered both this story and the nickname Don Litro for three decades before being shipped off to Giglio island (remember the “Costa Concordia”?)

Not even death can spare you.

When people speak of the former gelataria owner, dead for a decade, they reminiscence about the time he left his bar in the hands of four 11-year-olds so he could catch his wife in the act with the driving instructor.

Meanwhile, the instructor (he taught me two years ago) has a habit of jabbing students in the face with a black marker every time they make a mistake.

He also lost all his family’s money gambling on dog racing in his early 30s. I guess he’s still really bitter about it.

As for house intruder Nicolina, she still doesn’t know her 40-something son is gay and tells everyone who will listen that he moved to Florence to find a sophisticated city woman. If only she checked his Facebook page.

As for my own story, it just adds fuel to the fire. I wear open-toed shoes in winter and never say hello to people on the street. I was the only person to watch “The Rocky Horror Show” in English when it played it at the local cinema and once drove Giulio’s Vespa on the wrong side of the road. The man behind me was so enraged by the latter, he followed me home so he could get out of his grey Fiat Punto and glare at me.

I’m that “strange Australian woman” so strange I might not even warrant a story.

But the moral of this story is that small town Tuscany won’t ever put shaming gossip to rest.

As for the woman who was run over, she’s fine, by the way. Well, not fine, but not dead. I still have no idea who hit her. Seems he didn’t have a salacious enough story to stand out, at least not at the time. He does now.