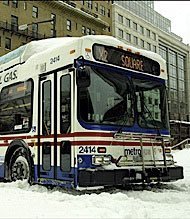 You rarely see people running to catch a bus in Dayton. They all look like they’ve been standing in the cold for an eternity. They know there’s no plan B. It’s do or die, all or nothing.
I

n Dayton, Ohio, I hopped off the bus into the frigid air. The sky was grey and flurries fell lightly on my heavy coat. I pulled my gloves off with my teeth and took the bus schedule out of my bag. Forty-five minutes until the next bus home. The one after that was 90 minutes later.

I wandered into the grocery store in search of olive oil. I walked the aisles probing every shelf, every item. Nothing. I found whole sections of sesame and vegetable oil, but no olive oil. Distracted, I finally checked my watch again: my search had cost me 40 minutes. Not good. I had five minutes left.

There are no bus schedules in Rome I’m aware of. The arrival-departure signs never made much sense to me, but I never had problems. I’d walk to the stop and, most of the time, hopped on within five minutes.

Maybe I was lucky.

I lived in San Giovanni di Laterano and worked near Piazza Venezia, so I had a jumble of numbers to choose from: 85, 87, 571, 117, 860, all more of less going my way. I preferred the 87 and 571 because they dropped me off in front of my office, but running late I never played favorites.

I don’t have that luxury in Dayton.

You rarely see people running to catch a bus in Dayton. They all look like they’ve been standing in the cold for an eternity. They know there’s no plan B. It’s do or die, all or nothing. That’s probably why the bus driver usually pauses to board people on the run.

On the plus side, I can actually pay on the bus in Dayton.

True, this has turned my life into an endless scavenger hunt for quarters and singles (tickets are $1.25), but at least I don’t go to bed wondering where I can find a place to buy a bus ticket at 7 a.m. In Rome, the only buses I ever saw with ticket machines aboard were the electric minis. While it’s a nice feature — saving you the ticket hunt — there’s little chance inspectors will track you down on the minibus, so there’s almost no reason for getting a ticket. Unless you feel guilty. I never have.

This brings us to another positive footnote: buying tickets on board. It saves you from yourself. The pay-for-boarding system eliminates trickery. You can’t hop on the back of the bus with an unstamped ticket. No, you walk in the front door, drop your change into the machine, and take your seat. There are no Gestapo-like episodes in which inspectors in heavy trench-coats get on front and back and demand your validated ticket. Your heart doesn’t skip a beat when you see a guy in a blue jacket. You pay for every trip you take, but your heart attack chances drop.

But this wasn’t on my mind as I made a desperate last lunge for olive oil with three minutes left before bus D-Day. Finally, I was directed to a place under the sesame oil and the giant bottles of vegetable oil. I grabbed a modest bottle of Bertolli ($16), ran to the self-checkout, whipped everything across the scanner and tore back out into the cold.

It was time. I noticed the bus stop bench was empty. A bad sign. I caught my breath and waited. I checked the schedule and my watch again. Resigned, I sat down and prepared myself for a long, cold 45 minutes.

And then the bus emerged from around the bend — five minutes late.

Which is why, in America, this is what goes through your head, putting bus stories into historical perspective: I gotta get a car.

— Editor’s note: The author now has one.