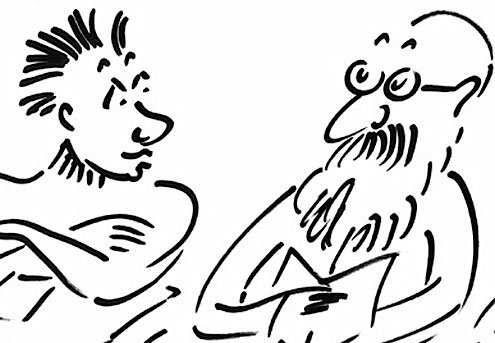 was 27 when I moved to Rome, determined to finally master Italian after studying it off and on for years. Naturally, making Italian friends was a key part of the quest to perfect my Italian, as well as helping me settle into a country where I knew no one. Several months on, I suddenly realized that the vast majority of my Italian friends, though about my age, were students. And despite recently turning 30, most of those friends are still students, including my own fiancé.

Rome is by no means the only city of eternal students. Education experts say that on average it takes Italian students five years longer to graduate than their counterparts in other European nations. Last year, Education Minister Letizia Moratti described the university system she took over in 2001 as “characterized by astounding drop-out rates, few graduates compared to the numbers enrolled, few studying abroad and a huge delay in the time it took to graduate.”

In 2004, only 32.5 percent graduated within the time limits set out by the degree program, a marked improvement on the mere 9.5 percent who managed that in 2001. The reason for the difference is a controversial reform to the university system that allows students to graduate with a kind of “mini-degree” in three years or a full degree if they specialize for another two years, instead of the previous obligatory four or five year degree, depending on the subject.

But why do Italian students drag their degrees out so long?

I graduated at age 21 after a four-year degree. Here, however, the average graduating age is just over 27, down from 28 in 2001. In Britain, students can’t choose when they sit their exams and as a result most graduate at around the age of 22. Italians, however, also finish secondary school at 19, while many of their European counterparts finish at 18. A year of military service, obligatory for Italian men until last year, accounts for another year.

My own eternal student has settled on politics — but not before a touch of indecision that saw him studying biology and medicine for a total of four years. In between, he had his year-long military service.

But what does about the rest of the student population?

Alessandra Maiello began studying humanities with a focus on Italian literature at Rome’s La Sapienza university when she was 20. She’s now 26 and hopes to finish by the end of 2007. Like many students she has a part-time job. She criticizes the “chaos and disorganization” at her university, where she says professors are impossible to track down. Her job at a bookstore has been a good experience, but she admits it was “stupid” to have selected studying the humanities. “I basically chose a faculty that interested me,” she says, “and not because I thought it would resolve the problem of finding work.”

Andrea Giorgi was 19 when he began studying politics in 1996. Nine years later, he’s hoping to graduate this autumn, after switching from La Sapienza to Roma Tre, which he describes as “less chaotic.” While he admits laziness slowed him down, he says living at home and working part-time at his parents’ travel agency didn’t help. “We know that Italians are more ‘mammoni’ — mamma’s boys — than others and dragging out university is the best way of staying home,” he says.

“There’s little desire for independence,” says fellow student Alessandra Maiello. “It’s good to be at home where you are spoiled.”

While many laugh at Italy’s “mammoni” phenomenon, Bianca Spadolini, who teaches education at Roma Tre, believes it helps account for the perpetual student syndrome. “It’s a rather easy life [at home],” she says, “so there is less motivation when it comes to the degree and the need to find work.”

She describes university as a kind of “parcheggio” or “car park” that is “comfortable for the young people and for the family because the children remain in the family,” something she says parents insist on more keenly since Italy’s birth rate began to fall.

Finding work is another dilemma, says Spadolini. Universities have little relationship with business and industry and students are not advised on the kinds of degrees that might help them most in seeking employment. “The most crowded faculties in Italy are the humanistic ones, resulting in a culture of generalized rather than specialized study,” she says.

Not knowing what to study appears to be common problem.

Between military service, Franco Ianni, 32, attended business and pharmacy courses. He then left the Italian university system, opting again for business studies this time at U.S.-run John Cabot University in Rome. He liked the smaller classes and the more accessible teaching staff. He graduated at 29. “I had little desire to study and I didn’t know what to do after university,” says Ianni, who jointly runs his family’s pharmacy.

Alessia Lenzi, Ianni’s sister-in-law, bypassed the Italian state system altogether, choosing the private LUISS University in Rome. She began in 1988 at age 18 and completed an MBA six years later, with a six-month job-hunting stint in between. “I was also interested in politics, but business seemed better for finding work,” she says. Another year passed before she landed a job in the telecommunications industry, but the smaller, better-organized LUISS, where attending classes was obligatory, made studying easier, she says.

For Enea Morrone, who finished his degree in communications at 24, three months short of the five-year time limit, the Italian system is arduous. Professors make studying too hard, he says. “You shouldn’t have to do exams which involve reading five to seven books and being questioned on the most insignificant details,” he argues.

Despite recent university reform, new figures from the Italian education ministry show that the university dropout rate is a massive 40 percent, with one in five students quitting after their first year. That, however, is a marked improvement over the staggering 65 percent rate registered in 2001.

Declines in Italy’s birth rate have also reduced the number of Italians of working age. Massimo Livi Baci, a demographics professor at the University of Florence, writes that the younger working age population — those between 20 and 45 —will drop more than 30 percent by 2030. Workers between 45 and 70 will increase by more than 11 percent.

For Livi Baci, Italy suffers from what he calls a “delay syndrome” in which young people enter the “economic and social life of the country late compared to their European contemporaries.” When they do come out “our society uses them little and badly.” The result, he laments, is disempowerment.