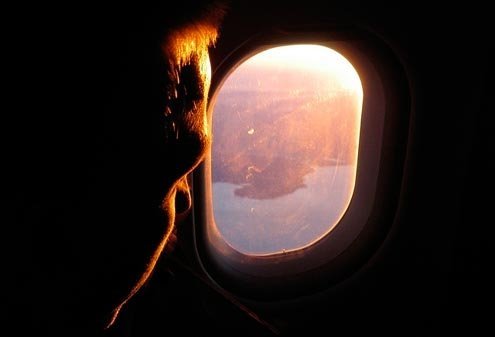 I knew I'd have to deal with my very jet-challenged husband and his fear of flying.
M

y New Year’s trip to Miami was a little different than the ones I usually make. This time I was traveling with a mix of family members and friends. How many? Try 15.

I’ve always been wary of trip organizers who put on a chipper look while saying, “The more the merrier!” Don’t get me wrong. I’m not an ogre. I am experienced traveler. I’ve flown back and forth from Italy to the U.S. for a decade. Which means I know it’s not always easy.

By now I know what to bring, how to dress, what to pack, and what not to. I know basic airport etiquette. Live and learn. Traveling with friends can be fun, sure. It can create a lot of picture perfect moments. But it can also create… a nightmare.

Based on my most recent experience (read on) I’ve come up with a set of rules. Maybe I should call them Nicole and Fabio rules.

Though people know our limitations, some are surprisingly willing to travel with us. This leads me back to our New Year’s expedition to Miami, when we traveled with group of couples from the Italian south, all Fabio’s friends. Seasoned travelers they weren’t, but certainly very enthusiastic and seemingly somewhat flexible.

Unfortunately, we got off to a rough start. Though we’d booked on Delta, Alitalia operated the Boston-bound flight. If you’ve ever traveled Alitalia, you know how that can go (long ago, someone insisted Alitalia was an acronym for “Always Late In Take off, Always Late In Arrival.”

And guess what? We were late. The delay was bad enough to kill our Boston-Miami connection. With New Year’s Eve knocking at the front door, I went into panic mode. I gave Alitalia a phony story about an expensive cruise we’d miss if we didn’t make it to Miami by December 31. After some haggling, it appeared they’d come up with a solution to get us to Miami by early New Year’s Eve.

Once in flight, I knew I’d have to deal with my very jet-challenged husband and his fear of flying. All went well for the first few hours. Then came the bump in the road. Fabio’s friend came down with an in-flight stomach virus and camped out near the bathroom. His wife immediately began discussing plans for their immediate return to Italy upon our Boston arrival.

“Esagerato,” I whispered to Fabio. After spending 10 hours on a plane they wanted to turn around and go home? For a stomach virus? Meanwhile, a flight attendant told us that Alitalia would be putting us up for night at the Boston airport Hilton and fly us out to Miami early next morning.

It seemed like the perfect solution, at least under the circumstances. Fabio’s friend could take some of the nausea medicine he’d packed away and get a good night’s sleep. But no. The next thing I knew, the couple had communicated with the captain asking that a doctor to be brought on board when the plane touched down. The captain replied that doing that would confine the passengers on board until the doctor gave clearance.

No way, I told them. I was sympathetic, but making people miss their connections because of flu symptoms seemed crazy. It only escalated. Next up was a discussion about bringing an ambulance to the gate. Ambulance?

I tried reasoning with them. I advised against the ambulance. He was sick but not dying. I wondered if they had any idea what this would cost them.

Once in Boston, we managed to coax them to the Hilton. I immediately asked about doctors. Being a Hilton, they had an on-call doctor. I became the go-between. Fabio’s ailing friend (a doctor himself) told me to tell the American doctor that he needed a certain kind of injection with a specific anti-nausea drug and an IV drip.

Meanwhile, his wife continued repeating the only words she knew in English (“Italian doctor”) in my ear as I tried talking. Turns out the house-call doctor could not administer the shot or an IV, at least not in a hotel room. He recommended oral medication he insisted would help.

But that wasn’t good enough, and off to the emergency room we went. There, we saw a sign that stated: “Patients that can’t pay will be treated regardless.” Otherwise it was cash or insurance. We might have even gotten away with not paying had it not had been for the relentless “Italian doctor!” chant.

Three hundred dollars later, a nurse and doctor saw us. Since I’d been anointed official translator, I was allowed into the exam room. Everyone else was left in the waiting room.

As the night wore on, Fabio started fuming. He wanted to know when we’d be going back to the hotel. He’d been in the emergency room for six hours.

We did make it back to the hotel — with a few hours to spare before our Miami-bound leg. “Don’t you love group vacations,” I told Fabio. But he was too busy worrying about the next flight.