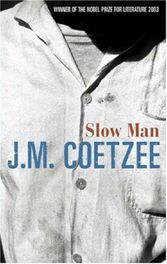 A divisive novel. The first part, about aging Australian photographer Paul Rayment, knocked from his bike, his leg amputated, is as stimulating as Coetzee gets. Rayment must rebuild his reduced world piecemeal, subjecting each person, place, and thing to a valuing. Physical and human worth are the novel’s tissue. The purpose, not only the worth, of identity is central to Rayment’s moody self-examination. Identity gains moral credibility when Rayment falls in love with his stolid Croatian housekeeper Marijana, flattering himself into a stilted but sensuous dimension he struggles to circumscribe free of self-loathing. The affection, naturally and necessarily, is unrequited.

But just as the novel (and Rayment) gain ballast, Coetzee introduces the ghost of Christmas Past: Elizabeth Costello. She’s the fictional Australian novelist of Coetzee’s eponymous book. Costello fusses over Rayment and establishes a rueful code of metaphysics that annoy Rayment no end. The strangeness of the twist led British author and critic Justin Cartwright to wonder whether Rayment really exists after the accident “or has he slipped into a parallel existence?” Is a separate but equal fiction (Costello) coming to extract (slow) man from his dream world? Or do fictional characters borrow from other stories (and burrow into other stories) when their on-page lives elude meaning? It’s easy to toss off question to displacement, but what exactly is Paul Rayment’s place? An adjunct of Marijana is he now Costello’s rib? Not clear. Few can develop hard landscapes as assuredly as Coetzee.