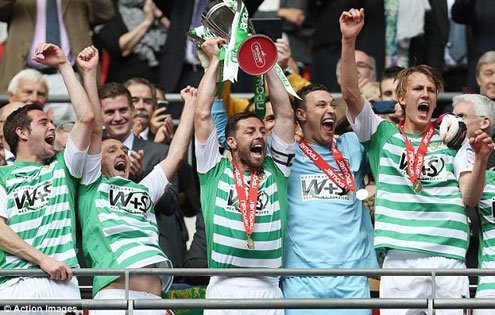 Much has changed since May 2013, when Yeovil defeated Brentford to reach The Championship for the first time.
S

ix games into the new season, an air of concern surrounds Yeovil Town’s poor start to their campaign in England’s third tier.

The Somerset club has enjoyed a significant rise since the 1990s, moving from the semi-professional game to the fourth and subsequently third division of the Football League. The fairy tale opened up another magnificent chapter last year when “the Glovers” (nicknamed for town’s traditional leather glove industry) won promotion to The Championship and one step (or rather leap) away from the Premier League.

But there would be no more leaping.

Yeovil finished at the bottom of The Championship and were relegated to League One. Their fate hardly surprised the 40,000 residents of a city that over the decades has seen more football adversity than success. But for a year, despite poor results, local fans were able to watch their team’s unexpected adventure in England’s second division.

Yeovil simply wasn’t ready for Championship level play (it won but eight of 46 matches). It had a tiny transfer budget even before its promotion. And the modern game is built on spending power.

The new season has — perhaps inevitably — brought the club’s supporters back down to earth. Three defeats in as many games represented the Glovers’ worst start to a campaign in 30 years.

The last time the Glovers opened so badly was in 1984, when a Gola League season began with eight consecutive league defeats.

Present goalkeeper Chris Weal was two-and-a-half-years-old at the time and had barely mastered holding a pen, let alone saving one. Yeovil even signed local hero, England cricket superstar and occasional footballer Ian Botham, to save flagging fortunes. It didn’t help.

Optimists would argue that the 2014-2015 season is barely three weeks old and that there’s still plenty of ground to run.

True. But the trio of defeats has seen pre-season optimism fade quickly. Even the club’s most successful manager has come under scrutiny.

Manager Gary Johnson’s tone appeared to change after loss number three at Gillingham. He’d previously insisted on looking at the bright side, encouraging fans to trust his belief his side had plenty to show. Suddenly he spoke of “clearing dead wood.”

No longer was a loss or two not much of a worry, Johnson was now fearful three could become four, five and even 10 — almost on a level with 1984-5 (that team went through three managers in a year).

Bold words, but hardly surprising considering how bitterly disappointing the Glovers have been in each of the defeats.

The squad is much changed from its Championship season, with those halcyon days already seeming like a distant memory. The lessons learned last year appear to be headed for the exit at the same time as some of the club’s second tier stars.

Worse than the fact Yeovil has notched only one win so far, the team has offered little reason for optimism. The three losses were followed by a victory and two tame draws.

While Simon Gillett’s free kick against Gillingham in the Capital One Cup was sublime, fans have witnessed just three strikes from open play. The team has looked toothless in the final third, offering huff and puff in the build-up without a final product.

Meanwhile, the 10 goals conceded are testament to the work that is required to improve a leaking defense. As Johnson has made clear in post-match interviews, drive, determination, hunger and quality are all missing from a club that should be aiming for a mid-table finish at least.

Yeovil fans, by trade, never expect their team to win every week. Instead, their men have been giant-killers for almost all of their history (a stunning 1949 defeat of Sunderland in the FA Cup sealed that reputation). What they do expect, however, is passion and pride in the badge — two qualities that have been tough to detect so far.

Who on the pitch has the leadership qualities to step up and carry the team? Johnson is clearly feeling the weight of the poor start but his options are limited. As the Glovers got their heads around new financial regulations, the manager received a budget he has already exceeded — though his investments have yielded few positive results. The mention of “dead wood” — when much of that wood belongs to players he brought in — sounded an alarming note.

With further investment unlikely Johnson will need to shift out to shift in, and that won’t be easy considering the stuttering start, which Johnson still insists can be turned around (“I hope that they will learn quickly enough to get us up there, challenging by Christmas time,” he said on the last day of August.)

In pre-season Johnson “hoped” his team had enough to compete. Though the season is long, sustaining of that hope now seems like more of a challenge.