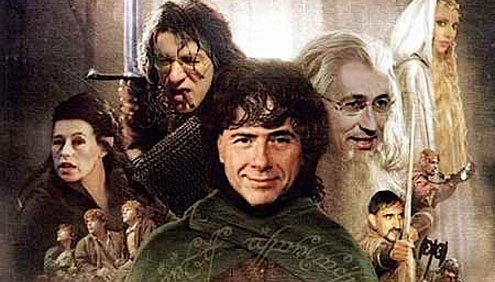 Berlusconi had provided ample fodder for parody over the years.
H

ere’s an Italian vignette from another time. It’s the early 1960s and a politician drives a rakish Lancia toward Rome at an outrageously fast speed, even for Italy. Beside him is a blonde who is not his wife. Finally, a heavy blue police motorcycle cop comes after him. The motorcycle eventually pulls the Lancia over and the uniformed officer demands an explanation.

The casually dressed politico speaks only one line: “Ma Lei sa chi sono io? — Do you know who I am?” The officer does and the incident ends there. The policeman seeks other fish to fry, and the politician and his blonde companion continue on to Rome.

What does this have to do with Silvio Berlusconi? He’s driving the car.

No prime minister in recent Italian history has received the major media scrutiny that the rich, influential and mercurial Berlusconi has stirred up since 2001, when he took office for the second time in his career. His allure is narcotic, as is the apprehension he produces among critics.

While modern Italy as a political entity is easily overlooked, Berlusconi’s contortions are not. In recent months — partly because of Italy’s winter turn atop the EU presidency — he has been inspected, interviewed, and frequently pilloried by some of the West’s most fabled media institutions. He has been fodder for endless caricature: “Little Napoleon” (France), “Refried Mussolini” (Germany), a Charlie Chaplin-style “Great Dictator” (Denmark). His diplomatic darts (Germans are “kapos”; Mussolini wasn’t all bad) and his near-teary affection for George W. Bush’s controversially excitable America have awarded him unusually high visibility in an easily distracted world.

The problem with visibility, of course, is the public denuding that goes with it. Since his political beginnings — he came up with Bettino Craxi, a brilliant but soon-compromised Socialist — Berlusconi has been compellingly dogged by accusations of corruption, conflict of interest and meddling with the judiciary (and there’s worse, and more subtle). He shares with Richard Nixon a compulsive need to rework a hackneyed line: “I am not a crook.” He grinningly defends himself in the same vein, labeling hostile media “deranged” or, predictably, “Communist.”

To a Puritan-trained but scandal-weaned American and British media, he is an orgasm in waiting, in word and deed. Here is “Italy’s richest man” (a favorite phrase) with a “stranglehold” on media (another favorite) who revamps laws to hide his putative crimes (a further theme) and still has the pluck to applaud himself as a savior.

No wonder the Anglo-Saxon longhand produced to explain Berlusconi to non-Italians is larded with moral outrage — similar in vitriol to the kind unleashed against Bill Clinton during the Monica Lewinsky scandal. “How dare you?” the articles blare at Berlusconi, though they might unconsciously be asking, “Why you and not us?”

Though the portrayals of Berlusconi as conniver and ingrate are not inaccurate, they’re hardly news. Berlusconi is no progressive. Nor is he a dictator. He’s a self-styled Mr. Feel-Good (logical name for a man who heads a party called Forza Italia!).

He plays well to small towns, is devoted to cash flow, to bronze age anti-communism, to the politically common notion that he’s right (and misunderstood), and that his friends are right (and misunderstood), that opportunism is every Italian’s implicit birthright. It’s a talky, aggressive form of political self-preservation he shares with Bush the younger, and that Bush and Berlusconi in turn share with Margaret Thatcher and Ronald Reagan, who ran the reactionary 1980s.

Hard times (and weak publics) reward salesmen and self-believers, and it’s not surprising Berlusconi cavorts best with Vladimir Putin, whose chaotic Latinate Russia is the post-1989’s most convincing precursor to modern Italy.

Yet the Anglo-Saxon writers (some are Europeans) just won’t quit, reveling, as the writer Tim Parks has simply but astutely noted, in “assumed guilt.”

Recently, the New Yorker and New York Magazine, both high-brow and traditionally caustic, joined a litany of blogs, daily newspapers and magazines — Britain’s The Economist leads the parade — in dropping all remnants of grace, and of objective pretense, in favor of conveying a Berlusconi that is La Dolce Vita’s miniature Darth Vadar, a venal, narcissistic mogul-mascot (New York Magazine dubbed him “mogulissimo“) who dwells in a self-congratulatory world that is bereft of an effective moral dimension and is populated by lobotomized yes-men, and (of course) family.

This cabal is responsible for hauling half-compliant Italy into a morass of political bad taste and quasi-comical conflict of interest. (Frank Bruni of The New York Times, fresh from a December interview, cited Berlusconi’s “soliloquies bereft of self-criticism,” the kind of wording the once culturally sensitive Times tended to confine to South American stooges — Paraguay’s long-gone Alfredo Stroessner comes to mind.)

Why do otherwise alert writers, confronted with rude, unapologetic opportunists in leadership positions (think Clinton and sex, Chirac and Iraq, De Gaulle before Chirac, to a lesser extent Castro), abandon all context and cavort willingly into self-righteous paroxysms (“How can he get away with that?”) teetering precariously on the brink of power envy?

Time and again, cliché is the Berlusconi paradigm (“Small, bronzed and balding, he oozes ambition and chutzpah…” The Economist.) He is a “shameless” (the word comes up often) former cruise ship crooner turned businessman turned tycoon turned politician – an easily-digested folklore. Much is made of his singer roots because they suggest anti-intellectualism, artifice, chicanery-by-association (think Sinatra and Mafia); the country that produced the cheerful nattering contained in songs like Volare and Quando, Quando, Quando (oh yes, and he knows the singers!) naturally produced Berlusconi, who (dear reader) is fit not to govern but to sing (think summers in Sardinia). Ah, what reckless fools these Italians are, and no democrats, they.

Berlusconi’s longstanding enmity with the Italian press is invariably his fault, with no mention made of the national media tendency to glorify assumption, not fact, and to allow political preference — whether it favors right or left — to permeate most journalistic dialogue (translation: to make things up.)

“Friends and foes agree it would be a mistake to dismiss Berlusconi as the lead buffoon in a comic opera,” wrote the Washington Post‘s Glenn Frankel in an October profile. So why then mention buffoons and comedies? (Daniel Williams, the Post’s gifted Italian correspondent cannot ruminate on Berlusconi; his wife is the director general of RAI.)

Yet operatic language, with a tip of the hat to the short-man complex and a nod to cosmetic surgery, is fundamental to the Anglo-Saxon Berlusconi canon.

“Berlusconi may be a joke, but a plausible one,” wrote Michael Wolff in New York Magazine, moved to near-climax last fall by the sight of Berlusconi, Rupert Murdoch and Miramax’s Harvey Weinstein mixing in the same New York City ballroom. “Compared to Berlusconi, [New York City Mayor] Michael Bloomberg, for instance, is so much flotsam and jetsam.”

And later: “[Berlusconi is] the exaggerated (or fully realized) version of what every mogul and egomaniac and self-promoter is trying to do: Put his brand on everything. Control it all. Grab it all.”

And finally the clincher, which begins, disingenuously, “From the American view,” (what precisely is the American view?) and continues: “He’s… achieved a kind of pervasive control, a perfect monopoly … that could not happen in other advanced democracies.”

Yet the tone of these many dispatches is not funny. They matter because they define not only Berlusconi, but the Italian character, though some periodicals try vainly to suggest the prime minister and the country are in fact different kinds of entities — one innocent, the other crooked; one compliant, the other predatory.

The Italian populace, say the critics, advertising cold slight as high praise, can’t be faulted for a sort of fatal susceptibility to all things clever and approximately honest, including the prime minister.

“Perhaps the problem with Berlusconi is less what he wants,” wrote Jane Kramer in a seminal New Yorker essay, “than the fact that so many ordinary Italians — impressionable, ambitious, unworldly, insecure, and spectacularly resentful — still want him…” Ominously, and willfully, the piece was titled “All he surveys.” Kramer is a wily European veteran and a marvelously skilled political observer, but is that really what many ordinary Italians are? “Spectacularly resentful?”

Or is that what Kramer is, she who had to wait months to see the man, and who was admitted only by happenstance, despite her reporter’s pedigree (“I managed to see Berlusconi, after months of trying, only through a mutual friend. … He doles out access the way he doles out business favors, on the basis of whom you know.”) This is the carping of the insecure, which makes you wonder what differentiates Kramer from an “ordinary Italian.”

But her next line is the tell-all, the one that reveals the rage in the rift. Reporters who vex Berlusconi, or just skeptics (“Reporters … more constrained by reality than he is, …” she explains) are known in his inner circle, she writes, as “people with the Anglo-Saxon habit.”

And the “Anglo-Saxon habit” — Berlusconi’s sense of reality as interpreted and judged by Anglo-Saxons themselves — cannot possibly permit vignettes about speeding off to Rome with pretty mistresses, telling police officers only, “Ma Lei sa chi sono io?”

It is sincere caprice pitted against sincere earnestness, a culture gap, one might conclude, as unbridgeable as it is hard to admit.