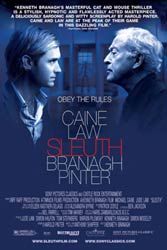 Kenneth Branagh’s Bang & Olufsen-cum-Kubrick take on playwright Harold Pinter’s classic pas-de-deux never breaks a convincing sweat — though Michael Caine and Jude Law give it their stylish all. Maybe after a several theatrical productions and a 1972 movie starring Caine and the great Laurence Olivier, “Sleuth” just doesn’t have a remake left.

Shrewdly toying with Joseph L. Mankiewicz’s 1972 casting, Branagh makes Caine into Andrew Wyke, a cuckolded mystery writer; Law (played by Caine in the ’72 version) is Milo Tindle, Wyke’s wife’s hermaphroditic lover who’s come bidding for a divorce agreement. The rest, a plasma of expressions, is snarled sexual rivalry and gamesmanship plastered on a whitewashed techno-backdrop reminiscent of “A Clockword Orange” (and Law at times a mirror image of Malcolm McDowell). The Caine-Law duo is a delight to watch and the Pinterian wordplay a marvel of keen snark in an era of systematic abridgement and text-message terseness.

But the rivals, meant for the stage, are a thick silver screen from anything but their own conceit. The proceedings are curiously suspenseless. And while Pinter is as interested in Massage as Message, hollowness dogs the whole. 2007.