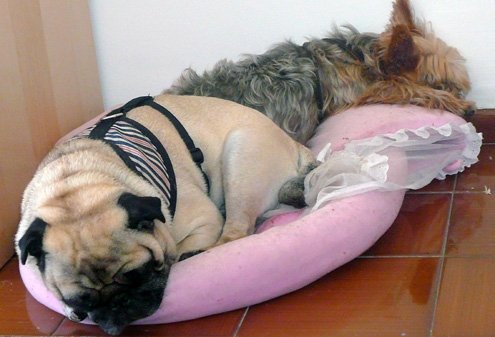 I didn't tell him that Bella's pink bed was mainly for daytime relaxation.
I

f Bella and the boyfriend was a hard adjustment and if Bella and babies could be a disaster waiting to happen, what happens in between?

According to Bella, the better question is what happens between the sheets?

When Bella and I first moved in together, I followed my mother’s advice and tried to crate train her. At bedtime, I’d put her in a cozy crate lined with my old clothes, to help get accustomed to me.

After a few sleepless nights, I decided that a pound puppy didn’t need any training. Bella just needed love. I opened the crate and immediately she hid under my bed. Nothing could coax her out of her evening hideaway so I launched a daytime counter-attack of spoiling.

My tactics worked, and after several weeks Bella woke up me with a paw on my cheek and her head on my pillow. It was like a Hallmark after-school movie: cute, endearing and heartbreaking. I couldn’t cut her out if I tried.

For the next four years of boyfriends and gentleman callers, Bella knew whose bed it was at the end of the night. Until a hot evening last July after a few nights of true doggy-style threesomes, when my Live-In Boyfriend (LIB) announced, “She has her own bed. She’s just a dog and she’s not sleeping with us.”

I didn’t tell him that Bella’s pink bed was mainly for daytime relaxation and that the words “just a dog” were as insensitive as telling a parent that her child had “just average intelligence and looks.”

Instead, I decided to play the role of Good Girlfriend and banished Bella every night. It was painful. She’d slink to her dog bed and stare at me until she fell asleep. I was guilt-ridden until I realized that LIB’s “We Don’t Sleep With Dogs” edict had loopholes.

“We Don’t Sleep With Dogs” didn’t affect daytime hours, so Bella and I returned our normal routine of girl and dog playing, reading, working and napping together on the bed while the sun shined.

As expected, LIB caught us in the act one afternoon with a surprise early return. My “Off the bed, Bella” was limp and unconvincing. I was forced to admit that every morning after he left and while I was working on the computer, Bella would take back her rightful place.

“The bed belongs to her,” I pleaded dramatically. “I belong to her. And now, you belong to her.” I pointed at his pillow where she slept soundly and proprietarily.

Though LIB still refuses to acquiesce to a dog’s life, he has struck a deal with Bella. He gets exclusive rights to the bed at night, but at sunrise, about 6 a.m., she can bark at me, and only me, to remind me to lift up the covers. Then she snuggles back into her place. And even LIB likes it.