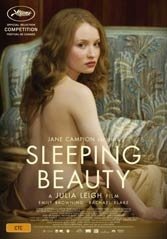 From Australian writer-director Julia Leigh comes a spellbinding film that takes hold quickly and uses repetition to tighten its vise. Emily Browning is Lucy, a petite Australian university girl who owes her income to incidental jobs, including medical research (she can swallow without gagging), office work, waitressing, and hooking, or so it seems. Answering an ad for a high-end escort business known as “Silver Service,” she’s transformed into near-naked sommelier and later accepts spending nights in a mansion where she’s offered up to voyeuristic clients as a fantasy companion. Prim madam Clara (Rachel Blake) assures her that he job does not require intercourse: “Your vagina is a temple,” to which the placid Lucy replies: “My vagina is not a temple.”

But hedging so many bets also makes for a narrative that is indirect and Kabuki-like (Leigh got the idea from Japanese author Yasunari Kawabata’s “The House of the Sleeping Beauties.”) In essence, Lucy plays sexual guinea pig to whatever comes her way. She is experimented on in the manner of her medical test job. Loneliness and self-destructive instincts no doubt play a major role in just who Lucy really is, but, cast in amber, she is never once called upon to look at herself in the mirror. If the goal is to ask questions about sexuality, estranged Lucy is little more than a thoughtfully engineered but perplexing tease.