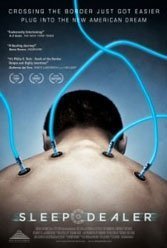 Director Alex Rivera’s inventive B-movie is a Mexican cyber-fest whose digital speculations got the jump on a number of trends. After a war with the United States, Mexico is sealed off by a wall and controlled by a digital corporation that uses military drones to tame violent water insurgencies (most of Mexico’s dam water has been bled dry and the country is arid). The North American workforce relies on Mexican “sleep dealers,” node-implanted have-nots who build the north’s cities using visual displays and virtual robot arms, neutralizing immigration. They are surrogate slave labor for the 21st-century.

Naïve farm-boy Memo Cruz (Luis Fernando Pena) joins these sleep dealer automatons after fleeing a drone attack in which his father is killed. Along the way, he meets Luz (Lenor Varla), a corporate memory harvester who falls for him, and eventually stumbles on a plan through to avenge his father’s death and give walled off and water-deprived Mexico hope.

The filming and story line are clunky, if not amateurish, but that’s not the point. Rivera is interested in articulating an indirect, digital view of corporate oppression. To get there, he almost haphazardly conjures up a colonial Latin citizenry at the mercy of attack drones, hemmed in by a software-patrolled border, and connected, at least among the elite, through an iCloud-style memory system. Once Memo is plugged into the node network and its robotic arms, he’s no more than an on-call worker bee — until the moment of reckoning.

If you like sci-fi with an insidious social and political punch, albeit primitive, this is well worth its 90 minutes.