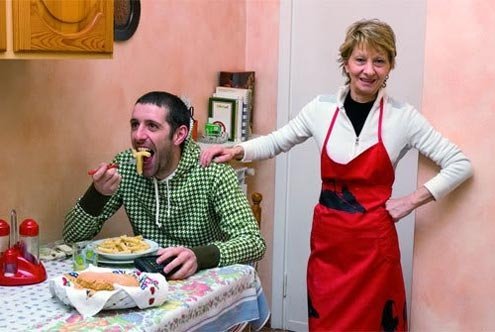 I haven’t read either one (or “Super-Moms from Fiji!” for that matter), but they got me thinking back on my own experience of parenting between cultures. I grew up in the United States of the 1960s and I live and brought my children up in Italy. So I was oblivious to the deep-seated parenting fears that exist in both countries. Italian parents fear primordial fear of cold drafts and the uomo nero (boogyeman). America has developed new ones I didn’t know as a child; fear of not getting ahead or suffering in any way.

That left me to hew my own way. American and Italian parenting styles and goals are often in conflict. But the one thing friends and relatives from both sides of the Atlantic agree on is that I’m a lazy, egocentric and reckless parent. I’m Slacker-mom; big time, worldwide.

Slacker-hood, just like motherhood, begins with pregnancy. For Italians, I was too active; hiking, bicycling and doing an international move in month seven. For Americans, I drank too much and spent waaaay to much time around Italians who smoked. Italian in-laws worried my child would waste away because I refused a baby scale a friend offered to loan me. Without the doppia pesata — literally “double weight”: before and after nursing — how would I know if my child was growing?

Unlike Italian babies, wool never touched my new baby’s skin. Nor were his undergarments boiled. This meant baby would surely be carried off by hostile air currents or infection before winter’s end. Professionals agreed. “But signora,” the pediatrician wailed, “you didn’t take the baby out in the cold did you?”

I did, and in a carriage, too. Does no one born below or above the 40th parallel reach maturity? What are Scandinavia and Canada, Argentina and Chile? Slacker-land, slacker-spheres?

Americans cringed as I courted death and disaster by embracing the Italian weaning staples of vegetable broth and ricotta cheese. At Italian toddler birthday parties, my children — and all the others — chowed down on Nutella panini. Nuts! Chocolate! Instant death! Call social services!

Italian nursery school teachers gently suggested I put the children in cotton undershirts, the maglie di salute, or “health t-shirt.” What if the little treasures were to sweat during recess? For religious reasons, my son was exempt from the public schools’ Catholic instruction and eating pork. One day he asked me if not wearing the “health t-shirt” was also a Jewish custom.

Slacker-mom hit her stride in elementary school. I never looked at my children’s homework or sacrificed afternoons to do it with – or for – them. Italians and Americans wrung their hands over my indifference to grades. How could I let my children risk making a brutta figura at school or not getting into an Ivy League college?

For Italians, after school activities were all about social strategies. Nice families tried to figure out where other nice families took their kids for music lessons or play rugby. For Americans, strategy is tied to college admissions. For me, it meant finding play dates and activities near a convenient tramline, easy parking or a place to walk the dog.

In high school, my children went to Milan discotheques, which is normal. Americans shuddered. Drugs! Drink! When my children found discotheques boring and parties that included drinking silly, I let them stay home on Saturday nights. Italian friends said I was indulging misfits who would not frequentare, or socialize with, the right people.

Italians cluck-clucked when I flew my children (alone) to American summer camps where they knew no one. Americans said secret prayers for me because my children took the tram to school alone at age 11.

American friends, for whom adult social life and conversation stopped in the delivery room, were suspicious about how often my husband and I went out. We saw all the latest movies — at actual movie theaters. Italians thought it was creepy that I didn’t talk to my children every day and know all about what has entered or exited their bowels during the last 24 hours.

As for sending my children to boarding school in America, that was seen as the winning trifecta of lazy, egocentric and reckless parenting.

For Americans, I’d thrown away the Ivy League trump card keeping my kids in the less competitive pool of foreign applicants. For Italians, the choice was riddled with parenting deadly sins: outsourcing to strangers, privation of home-cooked meals, not knowing their friends’ parents.

Slacker-mom also had a dark side. There was Child-labor mom, whose children helped clean out mouse nests in an old cottage, cut and carry wood and set the table every night. Despot-mom had the Teutonic habit of sending children to bed at the same time every night and reading a bedtime story (Italians thought they would not learn how to go to sleep by themselves.) Despot-mom made children sit through an entire meal (no media), use the proper fork and eat what was served (or go hungry under the “no-substitutions” rule). Americans were sure they would be stiff prigs.

Well, no. If I were a worthy Italian or American mom, I’d brag about their academic successes, their many friends and the varsity sports.

But I’m Slacker-mom. So I’ll just say they’re busy finding themselves and enjoying life. They tease me about being an oddball on two continents. But they still choose home for vacations, share dinner-table gossip, and “Modern Family.” Sometimes they even ask me for advice — on certain subjects.

Slacker-mom can add Pride to the sins of Laziness, Egocentricity and Recklessness.