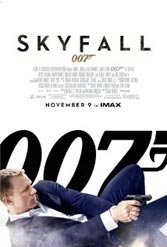 Director Sam Mendes knows not only what makes movies tick but also how to mimic the parody built into pop culture. He proves here it by ushering Daniel Craig’s 007 past his “Quantum of Solace” sophomore slump and into a witty, outrageous, and nostalgically British homage to secret agent James Bond’s 50th screen year (“Dr. No,” the first Bond, was released in 1962).

This time around, Bond is all but literally resurrected to give chase to the tormentor of boss-lady M (the ever-solid Judy Dench, in her swan song). It turns out that tormentor is a cyberspace-wise villain named Raoul Silva (Javier Bardem), a campy, caricatured, and sexually ambiguous once-time MI6 agent with a leeringly fey grudge against M. Bored with all the “running and jumping” of olden spy days, Silva has moved on to global hacking, stealing a list of embedded NATO agents and inviting M to “think on her sins,” which include having sold him out.

Medes takes a shrewd approach to the 50-year-old franchise by introducing the shot-but-not-dead Bond as an aging, white-stubbled and slightly withered antique (call him young man Gandalf), only to gradually drill him back into fighting form via Shanghai, Macau (femme fatale included), London and eventually the moors of Scotland. Don’t tell 007 it’s a young man’s game, even if new handler Q (Ben Whishaw) looks as though he hasn’t cracked 30 and mocks exploding pens (one of many nostalgic pokes).

The pacing and tone is straight out of comic book superhero territory — led by überhacker Bardem’s affected and cruelly joyous mugging (“We’re the last two rats,” he tells Bond). This is 007 through the prism of Burton/Nolan’s “Batman” and Peter Jackson’s “Lord of the Rings,” with Scotland doubling as Middle-earth (enter Albert Finney, almost unrecognizable).

Though Mendes’ “old dog, new tricks” theme eventually loses steam (the film grows unwieldy), Bond lovers will rejoice at the inside jokes, both visual and verbal. Mendes has made what many would call a romp, and while it doesn’t hold a candle to Martin Campbell’s 2006 “Casino Royale,” probably the most humanly intelligent and character-drive 007 movie ever, it’s a nice return to form for the birthday boy secret agent, now a 21st-century dark-edged superhero. Better late than never.