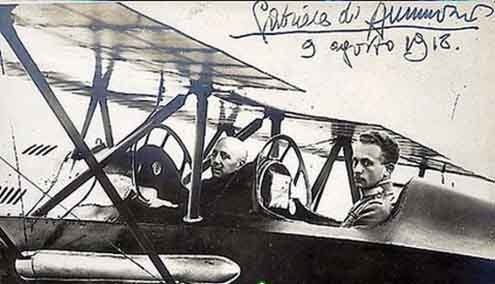 D'Annunzio wasn't a pilot, but that didn't stop his ambition.
O

n Aug. 9, 1918, 11biplanes sat in an airfield in Treviso, Italy. They were shadowed in the pre-dawn light, a flock of large and ghostly birds. Captain Gabriele d’Annunzio strode to his aircraft, part of the 87th Squadron known as La Serinissima. On the plane’s fuselage was his motto, “The Lion Roars Again,” surrounded by seven gold stars and a tongue of blue flame. It was the Lion of St. Mark, symbol of Venice, once the capital of a thriving republic.

Like all the other planes, d’Annunzio’sAnsaldo SVA aircraft was a simple, almost fragile-looking contraption — just two sets of wings separated by W-shaped struts and a boxy fuselage that sloped down to the tailfin. But the Ansaldo had proven itself during World War I. Its powerful 220-horsepower engine made it fast and agile enough to handle bombing, reconnaissance, and aerial dog-fights.

Ten of the planes were one-seaters. The only two-seater was d’Annunzio’s. When it took off, he would be sitting where he had on all previous missions — behind the pilot. D’Annunzio did not know how to fly a plane.

Before the war, d’Annunzio had been the most famous and revered man in Italy. A poet and a novelist, he wrote in a style so vivid that critics competed to come up with the most lavish praise. And his success in the bedroom was legend. He had seduced duchesses and baronesses (or, more precisely, had allowed them into his bed, for they fought each other for his attention) and had conducted a very public long-term affair with Eleanora Duse, among the world’s most celebrated stage actresses.

The poet-warrrior’s already-outsized reputation grew into that of a colorful war hero with the onset of European hostilities. He hardly looked the part, however — his stature was unimpressive, his head was bald, and at age 55 he was old enough to be the father of any of the young pilots who were heading to their planes in Treviso. He’d offered to join the Italian war effort in 1915, at 52. The government had told him no, protesting that he was a treasure the country could not afford to lose. Besides, he was too old. But one did not argue with d’Annunzio. “It is easier to hold back the wind than me,” he told the prime minister.

Since enlisting, he had participated in a variety of spectacular missions. Earlier in 1918, he’d been part of an Italian naval attack on the Croatian port of Bakar. The attack was of little wartime relevance, but everything d’Annunzio did helped stir Italian pride — particularly after Italian troops were routed by Austrian forces in the 1917 Battle of Caporetto on the Italo-Austrian front. Newspaper photographs of d’Annunzio standing beside his intrepid Ansaldo with “The Lion Roars Again” painted on its side became legendary.

And now he was ready for yet another mission. Three soldiers stepped forward: one to hand him his helmet, another his gloves, and a third his fur-lined leather jacket. The great man touched his pocket, assuring himself that he had both his lucky charms and the capsule of strychnine poison that he would swallow in the event of capture. He climbed into the rear seat.

In the eyes of the Italians, that d’Annunzio couldn’t fly a plane didn’t diminish his bravery. He knew how to man a machine gun and had proved his mettle. Once, he’d flown to the then-unthinkable altitude of 14,000 feet. It was -17 outside. (He contracted laryngitis from shouting to the pilot in the freezing wind.)

But his true skill was with another weapon —words. Inside the plane were leaflets with his fiery prose. In 1915 he’d flown over embattled Trieste, dropping tricolor flags along with a message to his fellow troops:

Courage, brothers! Courage and fortitude! … There is no enemy that cannot be destroyed by our courage. … The dawn of your joy is imminent. From the heights of heaven, on the wings of Italy, I throw you this pledge, this message from my heart…

At 5:30 a.m. d’Annunzio’s formation flew off on what would be the most dramatic mission of the war — to Vienna and back, a distance of 625 miles. Two previous attempts had failed, but this one would not. Just past 9 a.m. the aircraft reached the capital, where they let loose all their ammunition: 50,000 leaflets on green, white and red leaflets penned by d’Annunzio and translated into German. In part, they read:

Learn by this to know the Italians! We could be dropping bombs on you; instead we drop you a tricolor greeting, the colors of Italy! …

If you wish to continue the war — continue it! You will thereby commit suicide. What have you to gain? The decisive victory promised by the Prussian generals? Their decisive victory is like Ukrainian bread. You will starve waiting for it….

The raid on Vienna was an inestimable propaganda victory. World War I, already going badly for German and Austro-Hungarian forces, would end in November.

D’Annunzio, however, would remain in the headlines, entering politics. Not surprisingly, his approach was ultranationalist in tone. His life between 1920 and the rise of Benito Mussolini was filled with controversy and confrontation (he died in 1938), but his impact on early 20th-century Italian history is undeniable, and his “raid” on Vienna a memorable milestone in the evolution of propaganda, as the medium swiftly progressed from leaflets, to radio, to television, and now the internet.

— Laurel David Huber is the author of “The Velveteen Daughter,” a novel based on the life of Margery Williams Bianco, creator of the beloved “The Velveteen Rabbit.” Her daughter Pamela Bianco was a prodigiously gifted child artist who fascinated d’Annunzio.

About the Author: Laurel Davis Huber