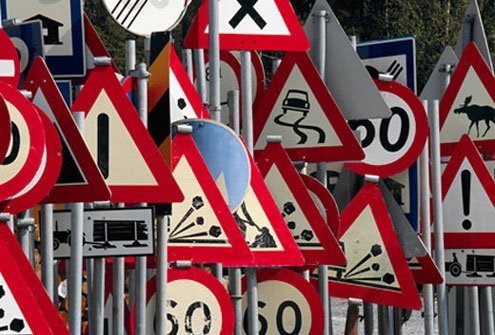 If Italy is a bureaucratic bullfight for Italians, it's positively Kafkian for foreigners.
A

t 36 I’m back in Driver’s Ed. No, my license wasn’t revoked. I just never had one to begin with — well, not an Italian one, anyway.

Truth be told, I’ve been driving here illegally for years. Living in Rome, I never really depended on a car to get where I needed to go. Public transportation, though shoddy and strike-ridden, got me to work — though not always home. Add to that the fact that I absolutely hated Rome driving, and that everyone assured me my American driver’s license was valid internationally.

Fast-forward to Umbria, where I recently moved with my family. Like most places on earth outside large cities, you need to own a means of transport to go anywhere. It’s been about 16 years since I last had to worry about this so I can be forgiven if it slipped my mind as we made the decision to relocate.

At first my wife suggested that on the off chance I was pulled over I just play aloof American. That would be tough, since my identity card states unequivocally that I’m an Italian citizen. Penalties are steep enough to discourage that idea.

Solution? I signed up for Driver’s Ed. And now it feels like I’m back in high school.

I’m learning the rules of the road a second time. Which might be a good thing, because all the driving I’ve done in Italy has only perplexed me more about what the guidelines really are. Rather than rules, they’ve seemed to me more like a seemingly infinite set of laws that everyone ignores. Now I can’t wait to learn them so I can begin ignoring them, too.

But having a driver’s license will also mean taking a step back. New drivers can’t drive any vehicle more powerful than a Renault Clio for three years. During that time, they can’t go over 100 km/h (the speed limit is 130 km/h on Italian highways). And forget about that glass of wine at dinner. Apparently a pup like me can have his vehicle impounded for being even slightly under the influence (there are more spot checks in the countryside than the city).

None of which jibes with my considerable experience behind the wheel. “Italians drive as if they invented the wheel,” a friend once told me. By comparison I am a timid American who gripes when someone changes lanes without signaling.

I’ve been studying for about 10 days now. I have a 350-page theory book and 500-quiz CD-ROM to get through before I’m ready for the exam. If I pass the written part I have to wait another month before taking the road test. Italy no longer issues learner’s permits. So basically we’re talking about a minimum of two to three months before I can drive again.

This is a bit distressing. The onus is on my wife to cart me around like a chauffeur. The upside is more baby duty, meaning I’m developing a much closer relationship with our eight-month-old than I would have otherwise. That’s hard to argue with.

“It’s like they go out of their way to make this as difficult for foreigners as they can,” said a friend from Israel who recently found out she’ll have to endure the same exam. If Italy is a bureaucratic bullfight for Italians, it’s positively Kafkian for foreigners.

An Italo-American friend who’s lived here for 20 years confessed that while he’d meant to get an Italian driver’s license he never did. Then came an accident. His California license was pulled. He opted for a bus pass.

But I’m not worried. After all, I’m learning useful new details. For instance, did you know that the handicapped can’t hitchhike on the highway? Well, they can: you just can’t pick them up. And that taking hallucinogenic drugs may impair your sense of judgment behind the wheel? Don’t tell me you knew that one!

All this is part of a much larger adjustment. Some is psychological (“I’m no longer a city dweller!”) and some simply practical (“I need to drive now.”) I got used to thinking of myself as a city person. The city becomes you in a way, and a big part of that is making do without a car. It was for me. But maybe the country can also become you.

If the woman I saw skinning a rabbit in her yard this morning is any indication, I have a long road ahead of me.