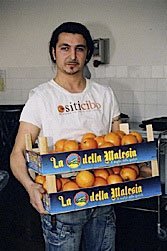 ecently, a new acquaintance asked what I do and I listed this column among the surfeit of activities that — as Italian grandmothers say — help pass the time. “Oh,” she said, “is that the magazine with all the tragic stories about how awful Italian men are and how bad Italian internet providers are?”

Before you think this column is intended to prove her wrong, let me say I’ve waited a long time to do justice to an under-reported Italian phenomenon: people who do make a difference. They are the poorly-paid teachers who inspire and educate despite apathy and obstacles, doctors who train and heal despite the disorder and pettiness, bureaucrats who rise from the desk to help or to make that extra phone call. All examples of daily rectitude and testardaggine.

Last month a friend invited me to a meeting of the Milan Professional Women’s Association. I tend to shy from such things, but the presentation by the founders of Siticibo attracted me. Siticibo, I was informed, was an organization that distributed surplus food from school and business cafeterias to soup kitchens in Milan.

On the dais were Cecilia Canepa and Bianca Passera, two nice, well-turned out, well-spoken, Milano bene ladies who had served on their school’s comitato mensa (cafeteria committee). Like me, they had been appalled by the amout of untouched fruit and bread discarded daily. Unlike me — and anyone else — they acted.

Their first attempt to send the overflow to a nearby charitable institute was rebuffed: they were told such “recycling” was a criminal offense. Undaunted, Canepa and Passera found jurist friends to draft a “Good Samaritan” law permitting the distribution of surplus food to non-profit institutions. They teamed up with the Banco Alimentare foundation, a national organization that’s been distributing food to the needy since 1989. While the draft law wound through parliament, the two women visited New York City to study City Harvest, a pioneer food re-distribution program. Its officials shared logistical and legal expertise.

All of it paid off.

Italy’s “Good Samaritan Law” (155/2003) — the first in Europe — went from presentation to publication in the Gazzetta Ufficiale in July 2003 in just 18 months. The deliveries began that December.

Gemeaz and Milano Ristorazione were Siticibo’s first donors. Now more than 90 school cafeterias as well as those of Eni, RCS Mediagroup and Europassistance donate daily. The Principe di Savoia and Marriott hotels contribute breakfast breads and pastries. The food goes to 45 institutions that feed 4,500 immigrants, recovering substance abusers, and children.

Twice each day, a small fleet of trucks and vans fans out across Milan, picking up and delivering. Some vehicles belong to Siticibo, others to TNT, the courier that supplies the logistical support. While full-time workers coordinate routes and staffing, some 60 volunteers pick up the food, which is treated and professionally packed.

Until now, Siticibo has preferred to keep a low profile. “Prima fare, poi parlare,” Canepa says. But now, Siticibo is talking, and asking. Siticibo already has an affiliate in Como with 14 donors and 17 recipients. There are feasibility studies in Florence, Bergamo and Rome.

Siticibo is open about its needs: Money never hurts. More trucks. Volunteers to drive and deliver (The requirements: a few hours per week — scheduled or on call; a normal driver’s license; some knowledge of Milan). They also need major food donors. Marketing and advertising help, legal work, nutritional advice, it’s all needed. Get your company canteen or your children’s school to sign up. Siticibo specifically appealed to the American community for something we are known to be good at: organizing benefit events (a nice change from some of the other things we are reputedly good at). And of course, spread the word about Siticibo.

The reward? Being around Italians (and non-) who use words such as “inspiration,” “allegria,” “teamwork,” “pleasant surprise,” “volevamo, potevamo.”

As near as I can tell, Siticibo is the only good thing to ever come out of a comitato mensa.