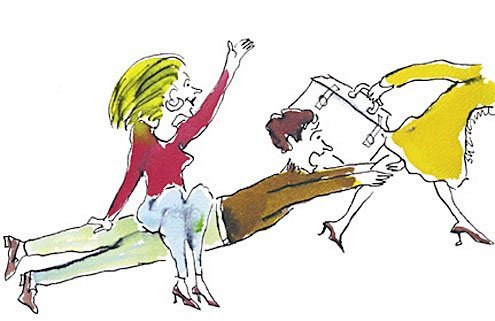 remember the day Fabio and I got the news that his sister was moving out and leaving Rome for a job she’d landed in northern Italy. It was mid-December and my family was in town for the holidays. On that day, everyone crowded into her room. My parents were unpacking everything they’d brought for their visit just as she began packing up her life to leave.

Fabio, on the other hand was very sad.

That night as we lay in bed, he sighed and shook his head: “È la fine di un’epoca.” The end of an era.

I turned to reassure him: “Don’t worry, this will be good for her. And well, it had to happen sooner or later. “I mean, you both are over 30.”

Before I moved to Rome, he and his sister had been living together for over a decade. After high school, he moved from Calabria to Rome to attend university. A few years later, his sister followed in his footsteps and they both moved into a house that their parents bought for them to live in while at school.

They were inseparable. She made his bed, washed his clothes and made sure dinner was on the table when he came home. She basically took the place of mom and he loved her for it. When she wasn’t home, he’d seek refuge in the apartment of one of his cousins, who both lived just a few buildings down from him.

Fabio was a classic mammone.

Even as they grew older, graduated from college, and formed serious relationships with others, neither felt the time was right to move out. For Fabio, it was almost too hard to move on to the next stage of his life.

I mean, why leave home (away from your sister) when you’ve got a good thing going on at home? Three years ago, when I moved to Rome, I found it odd that a sister in her late 20s and a brother in his early 30s would still be living together.

But I quickly dismissed the idea, replacing it with the classic thought most foreigners have when they experience some form of culture shock. “Oh, it’s just a different culture and I should respect it and try to understand it.”

And actually, I began to accept that thought, especially after seeing his other cousins in the same age bracket still living with their siblings.

Since we moved in together last summer, I’d slowly taken over some of “her” Fabio responsibilities. I did all the cooking and taught him to help out with some of the cleaning. Now, when something breaks in the house, he feels comfortable enough to fix it on his own.

It was a slow adjustment at first, but she finally handed me over the torch. Though it’s been nearly a month since she’s left the house, Fabio still hasn’t been able to fully shake the thought of not sharing a roof with his sister.

A few nights ago at dinner at his cousin’s house, the subject came up. He turned to his cousin with a straight face and said, “Who’s going to cook for me now that my sister’s gone? What am I going to do? I suppose I can come to your house every now and then.”