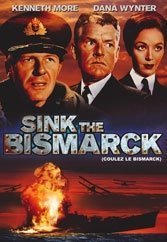 Of the many World War II films made in the two decades following 1945, British director Lewis Gilbert’s ranks among the finest in tone, texture, construction and realism. Thanks to strong acting from underrated Kenneth More and well-assembled stock footage, Gilbert creates an effective fictional framework for the Atlantic hunt and ultimate destruction of the German battleship Bismarck in early 1941, among the few Allied victories at a time when Nazi Germany was still on the rampage in Europe and North Africa.

More’s character, Captain Jonathan Shepard, is crafty and crusty, hardened but wise, is charged with managing the Denmark Strait hunt for the elusive battleship while working from the underground halls of the British admiralty in London. It’s a strategic cat-and-mouse game that cuts between stiff-upper-lip planning and credible action sequences, with early special effects assisted by impressive documentary footage. There’s also a minor but important subplot — low-keyed flirtation between Shepard and his chief assistant Anne Davis (Dana Wynter) — that helps humanize Shepard and give the goings-on a personal dimension. That dimension matters, since the Bismark chase cost more than 3,000 lives on both sides (HMS Hood, sunk by the Bismarck, went down in seconds with 1,418 men; three survived).

The Bismarck’s top officers are predictably saddled with heavy-handed hubris (with Karel Stepanek forced into a caricatured version of Atlantic Admiral Gunther Lutjens), but there’s no attempt to milk drama where it isn’t, or to overstate British heroism. Nor is there any mention of code breaking, a key ingredient in the real chase but left out here because the details were still under wraps. For fans of radio and TV history, famed CBS broadcaster Edward R. Murrow plays himself in an anchoring cameo.