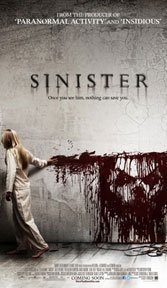 Seeking inspiration, true crime writer Ellison Oswalt (Ethan Hawke), eager for a best-seller after a number of bombs (“I just need another hit”), shoves his family into the suburban Pennsylvania home of a missing girl whose family was gruesomely hung. When he inexplicably uncovers a sinister lot of Super 8 home movies in the family attic, he’s suddenly sure he’s onto a much bigger story: the meticulously triangulated work of a cross-country ritual murderer.

Though director Scott Derrickson’s horror exploit has its moments, its claustrophobic inclinations soon slam into implausibility. Ellison’s son Trevor suffers from night terrors, so why move him into what amounts to a haunted house? (Answer: to help a gimpy story). And why does the haunted house behave like a cliché, inviting ill winds and full moons, snakes and scorpions, black dogs and the fog? Part of the lurid charm of horror is surprise. Here, surprise mostly has a welcome mat.

The increasingly paranoid Ellison, pushed to drink by ghoulish computer images, seems constantly to be asking for his own undoing. Ask and ye shall receive: The gap between children living and dead narrows and a curse takes shape. But by the time occult lover Derrickson gets to his macabre kicker, his story has worn out it welcome (no thanks to a heavy-handed soundtrack intended to cue gasping). Nice cameos from Vincent D’Onofrio and a wry performance from James Ransone as a sheriff’s deputy.