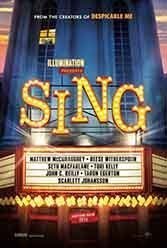 “Sing” is set in a composite present that suggests Los Angeles, Miami, and San Francisco, but it evokes an earlier era, when vaudeville was king and red-carpet theaters had both screens and stages. At the same time, it evokes the voice competitions — “American Idol,” ” The Voice” — that are part of the current reality television scene.

At the center of the action is Buster Moon (McConaughey), a Koala bear-old school impresario who has taken on the seemingly impossible task of reviving the Moon Theatre. It’s the theater where his father, who washed cars for a living (a set-up for a hysterical car wash scene to come), took him when he was a boy.

Moon’s method — there is madness in it — is to put on a revue featuring amateur performers: a shy elephant with chops, a porcupine with song-writing potential, a tuneful gorilla teen with a Cockney accent who plays piano, and an arrogant mouse who channels Paul Desmond on the sax and belts out Frank Sinatra’s “My Way.”

Everyone has talent. But, except for the mouse, they’ve yet to find the confidence they need to become successful. The pig Rosita (Witherspoon), an inexhaustibly clever, inventive, and beleaguered mother, who manages to care for her 25 or so piglets without even being home, must activate her emotional and organic side. In an exhilarating and memorable scene set in an empty supermarket, she does just that. Moon is clever, too, and his earnest, comical, and mistake-prone secretary, an alligator (writer and director Garth Jennings), joins him in the project.

Just when it seems like this motley crew is going to pull off their project, a disaster occurs — on an epic scale. It seems as if the story has nowhere to go. But it does, and when it does, get that hankie out.