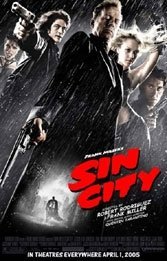 Like the digital compositions and high-def images which manufacture its energy, Robert Rodriguez’s comic book ode is a triumph of postmodern slick. It’s also lifeless, a hybrid cartoon-celluloid noir with lots of adrenaline but no core. Plot? Never mind. We’re in a brutal metropolis with crime and cruelty aplenty. Frank Miller’s series wasn’t much about redemption or happy endings. Instead, is tales indiscriminately charbroiled cops, hookers, and bad guys. Rodriguez follows that lead, but he’s so high on his bomber-jacket techno-characters that the sweaty, malevolent city comes up dry and contrived.

But if you kick back and ask yourself what you’re watching, the answer isn’t a movie but a violently kinetic fashion show that uses all the tools of the trade to try to be what it can’t: Words and colors on paper. Comic books captured the imagination by transcending their one-dimensional limitations. Here, with imagination snowed under, there’s no more ticket to ride.