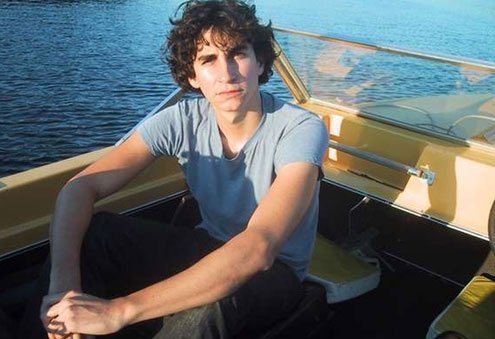 fter weeks dissecting various and assorted R&B slow-jams, it’s sometimes nice to take a break from that by returning to the simpler things. In the midst of the hottest recorded year on earth (according to The Weather Channel, for whatever that’s worth), sometimes a simple, strummed guitar can make things much more bearable.

Sebastian Blanck knows what I’m talking about. The New York City painter and musician has been touted by his label and promotions company as a one-time member of infamous new millennial noise pioneers Black Dice, but his first solo release speaks nothing to the confrontational racket of a very distant past. Alibi Coast (Rare Book Room) is gentle, harmony-laden folk-pop that will be jarring music of a different kind for anyone attuned to the tides of static or mutant screams customary of so many modern noiseniks.

Motivated by his brother Toby’s passing in 2007, Blanck has taken the pain of losing his closest ally in both blood and business and turned it into an inspiring collection of songs that also draw from the recent birth of his son. It’s these most personal of events that make Alibi Coast both affecting and powerful in their relative reticence. For songs that could have been cluttered with gaudy orchestral arrangements or overly emotive cries to the great beyond, Blanck retains a feeling of understatement throughout the album, and it’s a real pleasure to hear a less pompous Grizzly Bear in action.

On the other side of the pond, Norway’s Kim Hiorthøy is also trying his hand at folk-pop, though with a slightly different approach. Hiorthøy is one of the Smalltown Supersound label’s elder statesmen — his 2001 debut, Hei, was released early in the label’s existence. Their reputation has since been burnished by artists like Lindstrøm, Diskjokke and Tussle, but Hiorthøy has remained relevant with six solo albums.

His latest endeavor is not strictly a solo project. Hiorthøy’s talents make up but a quarter of the sounds you hear on Drivan‘s debut, Disko (Smalltown Supersound). Drivan formed inadvertently when Hiorthøy collaborated with two Swedes, Lisa Östberg and Louise Peterhoff, and Finn Kristiina Viiala for a project commissioned by choreographer, performance artist and filmmaker Gunilla Heilborn, best known (apparently) as “the foremost interpreter of Swedish ennui.” The four musicians agreed to continue their musical ideas. This is the result.

Its title could not be more misleading. Disko is chock full of exactly what you’re expecting when you hear the phrase “Swedish folk-pop songs.” Some of these melodies are drawn from ethnic Scandinavian folk songs, others from Stina Nordenstam’s People Are Strange, and all are sung in a saccharine lilt that speaks to other recently buzzed artists from the peninsula (Robyn, The Tough Alliance, Air France, etc.).

The lyrics are entirely in Swedish, though you can guess what a song titled “Campingvagn” might be about. If that’s not a tongue you’re familiar with, the music does its own talking in an appeal to our sunnier sides. Hiorthøy keeps listeners’ attention with unobtrusive digital glitches and minor production tweaks that faithfully speak to his historically restrained style.

Sometimes a simple strummed guitar is an appropriate reference point, and sometimes it speaks only to one element of an engrossing sound that has practically nothing to do with lazing around on your back porch kicking back cheap lagers. Such is the case with Fennesz Daniell Buck‘s album Knoxville (Thrill Jockey), a swirling album of contemplative avant-garde sounds and noisy climaxes.

The group consists of Christian Fennesz, Austrian guitarist and famed electronic manipulator; electroacoustic improv specialist David Daniell; and drummer Tony Buck, best known as a founding member of Australian jazz trio The Necks. Knoxville is a live document from 2009’s Big Ears Festival of these three artists coming together for the first time following a brief sound check, and its wondrous waves of noise and fluid pacing are a dynamic document of why these three artists are so revered in the experimental community.

A looped electronic sound and the gentle strumming of guitar open the album upon “Unüberwindbare Wände,” and for a solid three minutes, you’re inclined to believe this could be a pretty soporific experience. Not so. Electric guitars plug in and as Fennesz holds the loop and Daniell gets more out-there with his playing, Buck applies brush drum, cowbell, and cymbals accordingly. You can tell they are watching each other even without video on hand.

The joys of improvisation continue on “Heat From Light,” which eventually succumbs to static; “Antonia,” which is considerably quieter and more ethereal; and “Diamond Mind,” which builds to a brilliant climax thanks to Fennesz and his submarine synth sounds. Or whatever it is – who knows. The real joy is in hearing these guys play together to get such extraordinary sounds in so little time. At four songs and clocking in at just over half an hour, Knoxville is a can’t-miss even if you caught it the first time. If nothing else, it will encourage you to dust off those old Black Dice albums you haven’t played in ages.