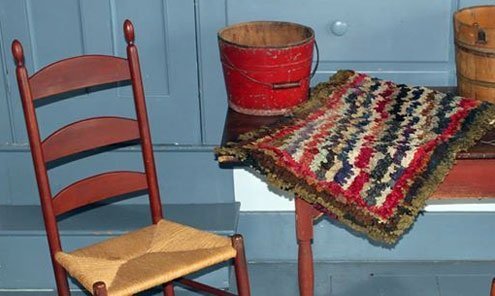 The Shakers believed in the community of goods and communal life.
I

see them in Milan, on Sundays, during holiday weekends or at vacation times. While Milanese enjoy Sunday dinner at Nonna’s, ski or sunbathe, these men, lost souls, carry groceries — usually ready-made stuff, maybe pasta, or a luxury treat such as pâté or chocolate. Often a bottle of whisky or grappa pokes from the bag. They are over 40 and well dressed. They might be people I know; bankers, lawyers, architects, journalists. I suspect some of their relationships didn’t pan out, children did not come — or did not stay. I also imagine derailed careers, by the Lehman Brothers effect, by political or regime change, or by the Internet.

There are female versions too, but they are either more rare or harder to spot. Women seem to be better at creating real social networks, or at being aunts or friends. Plus, there are more explanations for middle-aged women carrying grocery bags alone.

I spent my most recent long weekend — July 4th — in the United States, where I didn’t see any lost souls like those in Milan. I know they’re out there; America just hides them in cars. Still, I think about them, and not only on Independence Day. It happens every time I pass a landmark near my U.S. home; the Enfield, New Hampshire Shaker Museum.

The buildings that compose what is now the museum were founded in 1793. The Shakers were a branch of a Quaker breakaway sect that Ann Lee brought to America in 1774. Officially known as The United Society of Believers in Christ’s Second Appearing, Shakers established 19 communities like Enfield’s across the Eastern United States, including Ohio, Kentucky, Maine (where one is still active) and Florida. At their pre-Civil War peak there were between 4,000 and 5,000 Shakers living in settlements divided into smaller “Families” of 50 to 150 believers Families (Enfield had “South” and “North” families).

Today we remember the Shakers by the spare but graceful aesthetics of their furniture and the song “Simple Gifts” (also known as “The Lord of the Dance”), which is the leitmotif of Aaron Copland’s “Appalachian Spring.”

The Shakers believed in the community of goods and communal life. They were celibate and the sexes lived separately but ate together. Converts, the children of converts, orphans and children saved from “the poorhouse” sustained the Shakers. They believed in the equality of all people (and the sexes), the confession of sins, and pacifism.

Idealistic and Utopian, the Shakers were also practical and canny businesspeople, who channeled commercial competition and profits to their community. They invented the modern package seed business, which was highly successful, and their furniture was produced on assembly lines. Work and spirituality were entwined — they saw creations such as their furniture as forms of worship. Shakers believed each person had a gift to develop and a divine obligation to do so to his best ability. The members’ combined talents meant Shaker settlements were self-sufficient and produced their own tools, food, spiritual life and entertainment.

Despite the reverence for plainness, the Shakers were joyous. Dancing, singing and ecstatic movement (hence “Shaker”) were fundamental to worship and life. The Shakers were an answer to the disquiet and fear that followed the collapse of old orders with the coming of the American, French and Industrial revolutions. Today, our own old orders collapse — consider the post-1960s and post-Cold War. Like 18th-century England the established religions of parents and grandparents fail to satisfy.

Perhaps, then, it’s time for the Shakers again. Maybe they could bring solace to the dawn of the digital revolution.

If Shaker life did return, its values would bring particular comfort and advantages to the middle-aged; and especially to those who go grocery shopping alone on holidays.

A Shaker community offers companionship with the opposite sex, without the complications. It offers children and youth, without the responsibility of their being yours. It offers a family of your choosing, without the history or your own. Communal property offers downsizing and freedom from the limits of acquired things. (As well as daily use of genuine Shaker furniture most of us could not afford!)

The Shaker connection between movement and spirit is like yoga, but sober Shaker dress and bonnets are kinder to middle-aged hair and bodies than yoga wear. Joining the Shakers offers career-change. Take the farming, sewing, teaching path you didn’t take before. Never shop alone; cook daily with friends. Share every holiday. Make beautiful and useful boxes, chairs or clothes. Live a life pared down to physical and spiritual necessities; live at the top of Maslow’s hierarchy of needs. Or as the Shakers said in “Simple Gifts”: “‘Tis the gift to be simple, ’tis the gift to be free

‘Tis the gift to come down where we ought to be.”

The Enfield Shaker community is now a museum and, like many small museums, it struggles. It hosts tours, symposia and seminars. But maybe it should go back to full-time business. I know may people who just might join up. Starting with lonely souls carrying shopping bags — and me.