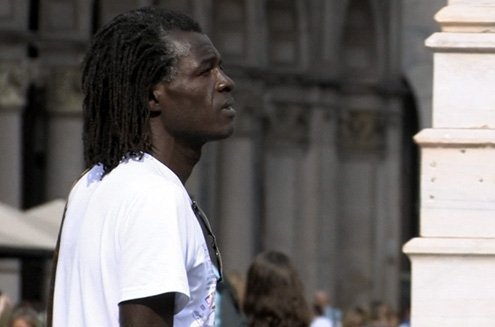 alk into the 707 Club on the outskirts of Bologna you might bump into the likes of Toni Servillo, dressed as Jep Gambardella, the indolent anti-hero of Paolo Sorrentino’s Oscar-winning “The Great Beauty,” resplendent in his white suit and horn-rimmed glasses. Or maybe you’ll meet a heavily made up Gina Lollobrigida in her Blue Fairy outfit from the 1972 classic “The Adventures of Pinocchio” (don’t worry, she’ll be holding a wooden puppet). They’re both on hand. So are a couple of scantily clad Edwige Fenechs, one paired with a lanky Adriano Celentano sporting his traditional aviator shades.

Comedian Alberto Sordi is also in the building, dressed as a medico della mutual (state doctor), the role he played in a hilarious 1968 comedy. He wears white scrubs (he and a half-a-dozen like him). There’s also at least one Don Camillo, the vivacious priest from the movie saga based on Giovannino Guareschi’s postwar “Mondo Piccolo” books (never mind that this Don Camillo is in fact a woman).

What might seem like a bizarre dream tailored to Italian movie buffs is really a fundraising party appropriately titled “Be your favorite Italian comedy star.” And the guests obviously take the dress code seriously.

But what all these revelers are really doing is considerably less frivolous. Proceeds from the costume party go to the Associazione di Giana (Friends of Giana Association), which in 2009 created the Mutti Amm award to help give aspiring migrant moviemakers a boost. In recent years, hundreds of thousands of migrants have arrived in Italy from non-European Union countries, many after unthinkably arduous journeys. The €15,000 prize is intended to motivate them to tell their stories.

It’s a laudable goal, I tell Laura Traversi, president of the Giana association, a Bologna lawyer and mother of two. “We wanted to do something to carry on the legacy of our friend Gianandrea Mutti,” explains Laura, her black hair styled in soft waves to imitate Italian actress Claudia Mori.

The Bologna-born Gianandrea Mutti, who died in 2008 from injuries sustained in a motorcycle accident, was a longtime movie distribution veteran with a network of friends throughout the film industry. After his death, Variety magazine called the 41-year-old Mutti “widely admired, both for his professional ability and his personal charm.”

Gianandrea, Giana to his friends, was passionately knowledgeable about film, says Laura. “His enthusiasm was contagious,” she adds. “To his friends, he was a larger-than-life figure who connected instantly with everyone around him. He loved bringing people together and had an expanding circle of friends.” Those friends often went with him to film festivals, discussing the movies they’d seen while taking in the local social scene. “Some people leave a void,” reads the association website. “He left something more.”

Mutti’s death “stunned us,” Laura admits. “We wanted to do something. So we decided to create an organization, after which we came up with the award idea. We thought it would be a good way to keep alive his love for movies and his love for friends.”

The films the association chooses to finance “need to be realistically make-able within a year of the granting of the award,” adds Laura. “They also need offer a vision of inclusion and an acceptance of diversity.”

The first movie the group backed was “18 Ius soli,” a documentary by Ghana-born director and activist Fred Kudjo Kuwornu. It probes how individuals born of foreign parents in Italy — many studying and working in the country — are still not entitled to Italian citizenship by law. Unlike most of the Americas, including the U.S., Italy doesn’t accept territorial birthright law (jus soli), in which being born in a country guarantees citizenship. “I love the movie because it treats topical and controversial issue with a light touch,” says Laura. “It’s Fred’s story of course, but it’s also the story of a lot of people.” The film has been shown worldwide, with Kuworno — who has also made a documentary about World War II African-American soldiers — addressing audiences in Britain and the United States.

She’s also particularly proud of the 2011 winner, “Va Pensiero, storie ambulati.” Another documentary, this one by Ethiopian director Dagmawi Ymer, it examines brutal racist attacks in Milan and Florence, also probing why the three Senegalese victims chose to stay on in Italy despite their physical and emotional injuries. One of them, playwright and actor Mohamed Ba, was stabbed at a Milan tram stop in 2009. Local police refused to investigate the attack, insisting it was part of “immigrant violence.” Though he published his first novel in 2013, he has not yet been granted Italian citizenship.

At the party, meanwhile, two working professionals dressed as “Er monnezza,” or Mister Trash, bump into each other. They’re carbon copies of actor Tomas Millian, who played Sergio Marazzi, or “Er monnezza,” a blue-collar thief featured in 1970s troika of cop movies. Nearby, Diego Abatantuono brandishes an axe, which he did in playing Attila in his 1982 breakthrough role.

The levity of the party doesn’t detract form the importance of the cause, says Laura. “A party just seemed to be the most natural way to fund the award and keep Giana’s legacy alive.”

The party, after all, is composed of movie-lovers — and of people eager to give others a chance. “It just seemed like something Giana could get behind.”

— Applications for the Mutti Amm prize are being accepted through June. Candidates need to have resided in Italy for at least 12 months.