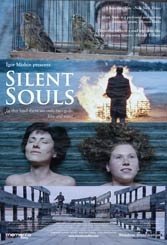 Love, loss and friendship help frame Russian director Aleksei Fedorchenko’s third feature film. Miron (Yuri Tsurilo) asks employee and friend Aist (Igor Sergeyev) to accompany him on a funerary road trip in keeping with the rites and customs of his ancient pre-Christian tribe, the Merja. Miron’s wife Tanya (Yuliya Aug) has died and he wants to cremate her body near the banks of the Oka River she loved. With Tanya’s corpse in the back and Aist in front with his caged birds, the twosome rolls from the small industrial village of Neya into the countryside. They’re like an American Gothic couple on often dialogue-less road trip. Miron at times recalls Tanya, which prompts narrator Aist to remember his youth and long-lost parents. Recollections of love hold grief at bay.

Though Fedorchenko has a keen and sensitive understanding of the human condition, the long silences are compounded by overall visual bleakness. Beauty is too often concealed. And there is some, including Aist’s old typewriter, the patchwork façade of his home, the faces and bodies of characters, and the river itself, bathed in golden light.

The film was nominated for the Golden Lion at the 67th Venice Film Festival and is based Denis Osokin’s 2008 novella.