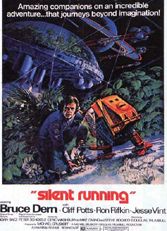 A strange and prescient movie that anticipated modern environmentalism. Long after Earth forests are “obsolete,” a spacecraft carrying the remnants of plant life orbits the planet. Freeman Lowell (Bruce Dern) and his robots tend lovingly to what’s left of plant life in giant globed greenhouses. When the crew receives orders come to jettison their Eden and return home — in effect ending nature — Freeman (the name speaks for itself) rebels. Douglas Trumbull, who constructed Stanley Kubrick’s special effects in 2001, directed from a Michael Cimino (“The Deer Hunter”) screenplay. For the digital generation, the special effects are laughable. But that’s not the point. Dern honorable shoulders the movie as a Thoreau in space unwilling to relinquish his Walden Pond. In these times of Kyoto angst, “Silent Running” is a small revelation.