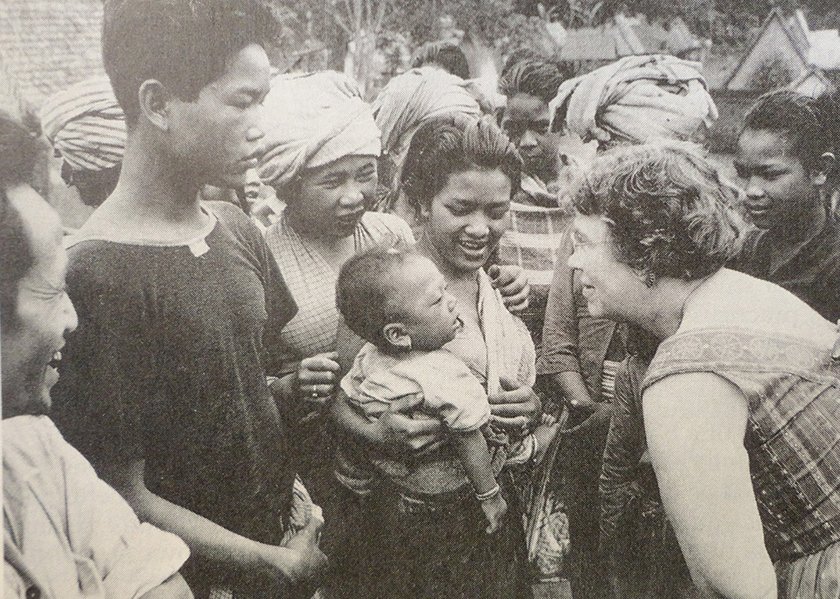 Margaret Mead during her 1930s work in Polynesia.
A

s a former educator, one of the things I remember best, and perhaps even miss a bit, is the tendency of students to ask absolute questions. Students tend to see their instructors not only as people who are knowledgeable in a certain discipline, but also as special beings gifted with the ability to provide all-encompassing answers to their every query.

This is rarely a possibility, but it is very is flattering. And although usually there is hardly an answer to queries that include the words “always,” “never,” “the most,” “the oldest,” “the original,” “the first one,” and so on, such questions provide the person on the receiving end with an opportunity to rethink their own knowledge and attempt to provide an answer. Which can be rather exciting, and brings with it the intellectual obligation to be honest and remind students that the response they’re getting is an opinion.

Having to answer questions forces you to rethink concepts, and sometimes advance them in a different light.

As a former professor of mine once told me, “as you teach, you learn.” Which means, when you’re teaching, you’re constantly re-elaborating the information you are delivering. A student who asks questions forces you to rethink concepts learned long ago, and sometimes advance them in a different light.

This is the way I choose to imagine one of my favorite episodes in the history of anthropology. A very well-known anecdote among specialists, which has as its protagonist Margaret Mead, the renowned American anthropologist whose seminal 1935 work, which she extracted from extensive stays in Polynesia, “Sex and Temperament in Three Primitive Societies” contributed to setting up the basis of what is now called Gender Studies.

One of Mead’s students once asked her what the first known evidence of civilization was. It is not difficult to imagine what kind of information the student was after. As a former student of anthropology myself, I would have been dreaming of mysterious artifacts, fascinating religious ceremonies, unfamiliar kinship systems, ancient forms of government, the domestication of cattle, the creation and use of weapons, or primitive sepulchers. Mead, however, replied that the first evidence of civilization was a 15,000 year old femur found in an archaeological site. A femur that had been fractured. And had healed.

In the animal kingdom, Mead explained, if an individual creature breaks a leg, it dies. The healing process of a fractured femur would have taken an average rest period of six months. The fact that the injured individual was able to heal meant that there was someone who looked after them, mended their leg, did their hunting or gathering, and offered them protection until they were healed enough to begin moving around.

Consequently, according to Mead, the first signs of civilization concerned empathy, compassion, and a sense of community. The evidence of the healed femur showed there was someone around who had developed the social-cognitive abilities necessary to interact with the injured and see things from their perspective. Someone who could feel their pain and who cared enough to look after them.

Neuroscientists have two main theories regarding the origins of empathy. The first one, known as “Simulation Theory,” states that empathy is possible because when we see another person experiencing an emotion, we simulate or represent that same emotion in ourselves so we can know first-hand what it feels like. The second theory, which is exactly the opposite, claims that humans can use cognitive thought processes to explain the mental state of others. By developing theories about human behavior, individuals can predict or explain others’ actions.

According to Mead, the first signs of civilization concerned empathy.

Whereas the empathic process arises from emotional responses, learned conceptual reasoning, or a combination of both, it is clear that the caretaker protagonist of Mead’s story had developed certain cognitive skills that allowed them to provide for their comrade.

I have often been asked what the purpose of cultural anthropology is. How can the knowledge it provides be applied to improve our life in the 21st century? It is a recurring question. Anthropologists are notorious for spending a considerable amount of their time trying to define their discipline and its purposes. This is because the discipline was founded in the 19th century with a very different scope, not applicable to the contemporary world.

If I had to choose a single episode that shows the educationally positive impact that cultural anthropology could have on new generations, I would point to Mead’s femur anecdote and the potential theoretical framework that could be derived from it. In recent years, the ascent of right-wing populism, with the complicity of social media, has created a tangible threat to the protection of human rights. A common motif in the rhetoric of right-wing populists is that migrants or asylum seekers pose a threat to national identity, in other words, to culture itself. Mead’s anecdote reminds us that culture was born with the ability to empathize. It is empathy that sets us apart as a species. This is one of the many reasons why I have firmly come to believe cultural anthropology should be a school subject, so that a cornerstone exists, with empathy as its mortar.