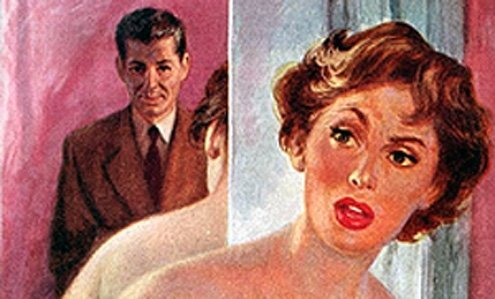 I thought you had a boyfriend, not that you were married.
S

ix years of living in Italy and I hadn’t come across the mythic Italian stallion. Until last Monday.

At 11:30 a.m. on a beautiful and sunny October morning I walked toward the Metro stop down along historic Via Urbana not far from Via Nazionale. To the right I saw a few antique stores, all closed. To the left I noticed another one, open. Its owner, a white-haired man in his seventies with a big smile and sky blue eyes, sat in a navy folding chair that blocked the entrance. He wore a dapper brown corduroy jacket.

Certainly, he replied amiably, come in, edging his chair aside. I walked in and he followed me. Furniture was piled up in the entrance hall and it was hard to distinguish what exactly was in the pile. I remember thinking the owner might have better luck selling his wares if he improved the presentation.

“Avanti,” he said, and motioned for me to follow him.

I continued along a slim corridor. “Avanti, avanti,” he repeated. He wheezed as if he had asthma. I could hear his uneven footfalls striking the floor. I thought to myself, “Poor guy, he’s not going to be around for much longer.”

Wooden headboards to the right of us, piles of what looked like broken wood chairs to the left, we choo-chooed to the darkened room at the end of the corridor. He brushed passed me to switch on the florescent light.

I expected lamps and chairs.

I gazed around the room, my eyes adjusting to the penetrating light. I realized something was wrong but I wasn’t sure what.

“See how many things we have?” he said.

There was a double bed, a kitchen table with six chairs, a sink… and it hit me: He lived in this part.

“Are you married?” He asked me.

They say you can smell danger. I could. It smelled crisp.

“Yes,” I said, backing up toward the door. I showed him my wedding ring, “See my ring?”I had two goals: Gain time and continue retreating. As my strategy came together, he put his arm around me, and with surprising strength pulled me toward the bed.

“Se volemo diverti‘?” “Do we want to have fun?” I recognized the Roman slang.

After that, my visual memory fades.

Instead, I remember hoping the door was still open. I recall thinking how thick city center apartment walls can be, and that no one would hear me locked in. I pivoted out of his grasp and into the thin corridor.

I was thanking him. Ridiculous.

He followed me, babbling about how lucky my husband was. “Do you know my name? You wouldn’t believe it if I told you… Signor Buonamore… Mr. Goodlovin’.” I thought, “Please just get me out of here.”

Sunlight appeared. I was out.

I turned to shake his hand, at least I think I did. I recall a flush of embarrassment imagining what the nearby store owners might imagine — “Oh Mr. Goodlovin’ has had his way with another blond foreigner in the back room.”

As I gathered myself, he spoke.

“I thought you had a boyfriend, not that you were married.”

With my husband, I answered. And he’s Roman. And very jealous. I backed up. Amazingly I was still conversing with him.

“Well, in ogni modo, anyway, if you want to come visit me and have some fun we can go back,” he said showing me the hall I’d just fled. “I would be very pleased.”

Walking downhill toward the metro, I realized I was trembling.

My friends had mixed reactions. My girlfriends said I should lodge a “denuncia,” an official police complaint. The men said I shouldn’t bother. Your word against his, and they nodded dubiously. Anyway, the police would do nothing.

They recommended more subtle reprisals, finding a way to make him lose face among fellow storekeepers, for example.

Most didn’t understand why I hadn’t immediately performed some convenient sequence of “Kill Bill” moves, Uma Thurman karate chops and the like. The Calabrese friend in my lunch group, a fan of Mafia yarn, told me my husband should go back and burn down the store. He had a variety of solutions for disposing of the man’s bones. But by then I’d stopped listening.

He then added, almost casually, “You know that store wasn’t an antique store. It’s the oldest Mafia trick around. Antiques are used as a cover for money laundering. They can justify having large quantities of cash. That store was probably a cover for prostitution.”

I’m not going to use non-existent karate or burn him. I’m not even going to make him lose face. Right now I’m thinking IKEA.