Sight at a loss for words 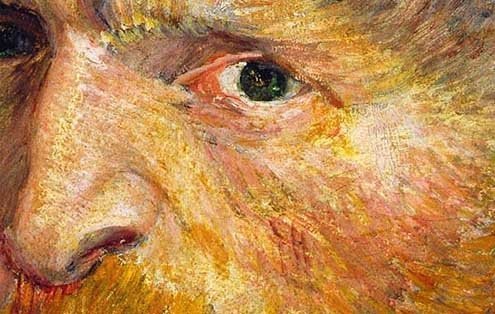 iving through glaucoma’s nuclear winter recalibrates the visual metaphors on which language depends. Day-to-day life expressions use clarity of sight as cornerstones. To wit:

“I’ll look into it,” or “be on the lookout for.” (No magnifying glasses allowed.)

“You can’t hit what you can’t see.” (Even baseball gets into the act.)

“Care to shed more light on that?” (Enter clarity and focus, both features of sight).

“I take a dim view of that,” or, “He’s a shady character,” or, “I can’t see the forest for the trees.” (Poor contrast and night elicit fear.)

Or, “Mine eyes have seen the glory of the coming of the Lord.” (The opening line of “The Battle Hymn of the Republic,” memorably enunciated by Martin Luther King, Jr. in Memphis a day before his 1968 assassination.) King included the lines as a rhetorical exclamation point.

Not seeing also confers emotions — so long as the invisible is naturally so, as in a germ or an atomic particle. The infinitesimally small is perfection in a separate realm, like galaxies writ large thanks only to telescopes.

But day-to-day sight metaphors have no use for telescopes To not see, or not see well, particularly in a society increasingly given over to words and images projected on tiny monitors, is well-nigh inconceivable (unless you’re over 80 or and eligible for official decay).

So it is that I agree with the metaphors I’m fed daily. Of course I see it this way or that. Yes, I see what he or she means. If necessary, we can “see” about this or “look into” that, perhaps tomorrow. If I’m asked if I see what someone else sees, I nod.

Only when it becomes evident that I can neither see nor send text messages and struggle with emails, do I explain:

The human eye has an optic nerve that connects its outer visual functions to the inner brain. If the cells swarming in those facilitating cables wither and die, there’s no available repairman or wormhole patch. Visual coding and communication is permanently disrupted (with permanent among the most denial inducing words in the fix-it oriented American lexicon). The pathways that once allowed the eye, a viscous camera, to send its ocular “instagrams” to the highly reclusive brain for processing are darkened forever. Not even stem cells grow in that barren environment. Absent optic viaducts and backroom developing, eyes and brain are all but estranged from each other. So, your call can’t be completed as dialed. Hanging up and trying again doesn’t help. The windows to the soul won’t open.

Friends who peer into me (cocking their heads like aliens) can’t believe anything’s wrong. You “look” great, they tell me. Both eyes are cheerfully brown. Yet there it is again, the power of appearances, of wishing so badly that what looks good is good, never mind “things aren’t always what they seem.” If the body falters, human expectation begs evidence – a broken arm in a splint or abdominal sutures after surgery. Tangible damage becomes its own source of mortality-blocking hope.

But sick eyes are not sick infants. They don’t grow sullen and still. They dance the dance they’ve memorized over time. They fool the world, and me, every morning. I blink hard. I try again. But the two blurred marbles are adamant about their rupture. Until not seeing is believing, and I put the metaphors aside.