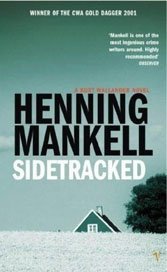 By Henning Mankel, translated from the Swedish by Steven T. Murray

What is it about Sweden? If Denmark is rotten, one wonders what Shakespeare would have called the trafficking of immigrant women and the corrupt politicians who people Stieg Larsson’s trilogy and Henning Mankel’s crime novel “Sidetracked” (named Sweden’s Best Crime Novel in 1997). “Sidetracked” was my first encounter with Mankel and detective Kurt Wallander. It was a lucky one.

After witnessing a girl set herself on fire, Wallander, who works in a smallish town on Sweden’s southern coast, finds himself on the trail of a serial killer who scalps his victims. Though the writing is matter-of-fact, which in the hands of a Scandinavian doesn’t mean dull, Mankel pulls you in and holds you tight until the end. He describes; the reader feels. Mankel’s characters are complex, without being exaggerated or neurotic. His picture of Sweden is paradoxical and provocative. Held up to us all as the model of modern society purged of its savage inequalities, it is a revelation to see the limits of Sweden’s widely-admired social experiment.

It says much about human nature when domestic violence and perversion survive in a society that many believe had transcended such ills. The best thing about discovering this book is that it’s part of a series — which means a rich mine of reading ahead. Nothing rotten about that.