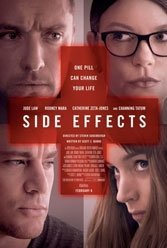 Soderbergh and faithful writer Scott Z. Burns use the longtime flood of American antidepressant TV advertising to concoct an engaging thriller that snakes through an hour’s worth of misdirection before gradually tipping its hand. What begins as a fairly conventional indictment of the anti-depressant industry morphs into a sinister cat-and-mouse game, and it’s worth the wait.

For Banks, suddenly under scrutiny, Emily isn’t a murderer but a victim of side effects. To testify on her behalf he seeks details from her former shrink Victoria Siebert (Catherine Zeta-Jones) who wields her ambiguous sexuality like its own narcotic. Inconsistencies emerge and Banks gradually becomes obsessed with finding out more.

Once Soderbergh shoves open this edgy door, he and his cast deliver a confident “what goes round, comes round” thriller about depression as opportunism. The film’s working title, “The Bitter Pill,” would have been more apt. If this is really Soderbergh’s filmmaking swan song, he’s gone out with a taught, clever, and accomplished story that without being spectacular reaffirms his professionalism.