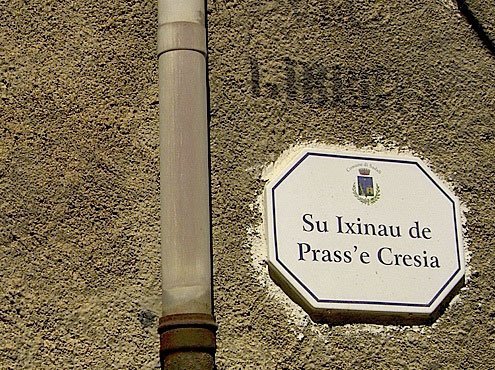 Street names and family conversation is still sardo-centric, but little else. Photo by Eliot Stein.
I

had warned Nathascia that I hit a language barrier in Cagliari, delaying me en route to dinner at her parents’ home in Uta. After purchasing a bouquet of chrysanthemums laced with oleander near my apartment, I had asked the two florists, both eager to practice their English, how one writes, “Signora Piras, I hope you enjoy fresh flowers” in Sardinian — a gesture that I thought might bridge the cultural gap between guest and host.

“Where does she live?” asked the first florist.

“We only speak the Cagliaritano dialect of Sardinian,” admitted the second. “She might not understand it.”

“We can try,” said the first. “But we can’t promise anything.”

Two phone calls and three drafts later, the florists stuffed the card into a pastel envelope and wished me luck.

Signora Piras ushered me into her home with a kiss on each cheek. Delighted by the bouquet, she rushed to fetch a vase. I followed her into the kitchen to hand her the card. She read it and looked confused.

“Don’t worry,” she said, “I don’t need any more fresh flour, dinner is already made.”

If Dante were among the throngs of Italians from il continente flocking to soak up the sun in Sardinia, he too would be left scratching his head by the ancient mixture of guttural-sounding suffixes pre-dating the language he coined. Recognized as an independent language rooted in Latin, Sardinian, known locally as “sardo,” is the largest minority language in Italy and is as different from Italian as Spanish or French. But with distinctly fragmented dialects of sardo spoken throughout the island, to understand Sardinia’s first language is to understand its history of upheaval.

Rome subdued Sardinian insurgencies long enough to leave its mark on the island 2,000 years ago. Since then, Sardinians have seen more occupiers and invaders than a game of RISK. To defy those who exploited them, Sardinians withdrew into themselves to preserve their own language — a direct offshoot of Roman Latin sprinkled with older words describing geological formations and animals. As colonists came and went, the island’s original language lost its impermeability and radically different dialects emerged.

In northeastern Alghero, residents still cling to a 16th-century version of Catalan introduced by the Spanish. The island of San Pietro uses a Ligurian dialect from Genovese settlement. And the dialect spoken throughout the southern Campidano where Romans harvested grain differs greatly from the northwestern Logudoro region — where the “purest” sardo dialect emerged after years of uprisings thwarted Roman influence.

Trying to make sense of a language that changes with a 10-minute drive has induced most Sardinians to speak Italian. The island’s greatest writers have all abandoned sardo, opting for wider audiences over localized heritage. With the exception of a nightly news broadcast in both Italian and sardo, the island’s television is produced exclusively in Italian. According to the Unione Sarda newspaper, 80 percent of Sardinians are bilingual, speaking sardo within their community and relying on Italian when the need arises. However, that number is shrinking. As young people, businessmen, and those migrating to mainland Italy distance themselves from their provincial tongue, the future of sardo is in jeopardy.

Just don’t tell that to my roommate, Daniele. An economics student at the University of Cagliari, Daniele is the first to admit that his Italian is poor, but the last to recognize a correlation between his sweeping grammatical errors and his failure to pass oral exams. Although sardo is widely-spoken in homes (where it is learned), teachers and professors have been urged by the region’s government to ban its use in classrooms — a push aimed at lifting the island from its economic inertia. This drive to adopt the more commerce-friendly Italian leaves Daniele fumbling to remember technical terms in a language he resists.

After my language faux-pas with the Piras family, I asked Daniele to teach me the most basic of sardo vocabulary: the days of the week. After stressing the double “d’s” and emphatic “u” sounds, I picked up the phone, applied a guttural tone and recited each day to Nathascia.

“Is that Oristanese?” she asked.

Sardo has proven to be my biggest hurdle in cultural assimilation. To overcome it, I’d have to invest in something other than florists and Daniele. I put my faith in a bookstore. No luck. The only sardo dictionaries were divided by dialect.

“I’ve never heard of a ‘standard’ sardo dictionary,” explained the owner. “But let me know if you find one.”

“I will,” I said. But something tells me it’s not even worth it.