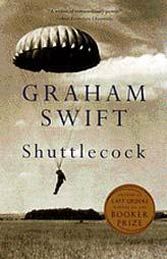 If “Waterland” is Swift’s masterpiece, “Shuttlecock” is its harbinger.

Prentis works for the “dead crimes” branch of the London police. His father (a spy codenamed “Shuttlecock” during the war) is mute and mad, his boss (Quinn) is conniving, his office files keep going missing; for Prentis, daily life is guilt-ridden and ghoulish.

But there’s a catch.

“Shuttlecock” is also the name of a book Prentis’ father wrote about his wartime experiences — back and forth from France. The memoir, in turn, is a channel, a worm hole, means for Prentis to invent his nonverbal, incapacitated father. Swift merges personal exorcism and existential mystery into a taut package. A brilliant writer, he’s also an uncanny mood-maker, shifting from ominous to kind. Here’s a father-son story with a stinger.