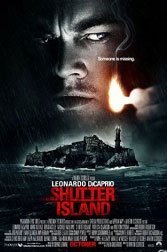 Scorsese’s psychological thriller is a pudding of mid-20th-century Gothic paranoia spiked with all the usual suspects: Nazi atrocities, atom bomb fears and intimations of government brainwashing. Add the gloom of detective fiction and you get a… tediously tangled web. So tangled that the long-in-coming climax packs surprisingly little punch.

In 1954, U.S. Marshal and Dachau-liberating vet Edward “Teddy” Daniels (Leonardo DiCaprio) and partner Chuck Aule (Mark Ruffalo) are dispatched to track down a delusional escapee on foggy Shutter Island, a high-security mental facility off the Boston coast. What they find instead is top-secret Dracula Castle-like asylum run by an arch school-tie chief named Dr. John Cawley (Ben Kingsley) and a spectral associate in the Josef Mengele vein (the venerable Max von Sydow as Dr. Jeremiah Naehring).

Impressionable Teddy is soon gripped both by Dachau flashbacks and memories of the death of his wife and daughter at the hands of an arsonist who was diagnosed as criminally insane. Amid menacing doctors and raving patients, present and past morph into a collective hallucination. Teddy starts believing the arsonist may be on the island and that dark deeds are afoot in the local lighthouse. The tone and pace are kin to Hitchcock’s “Vertigo” and “North-by-Northwest” but without badly-needed wit and comic relief. Instead, all is drenched in kitchen-sink noir.

As Teddy digs deeper, he’s seemingly stripped of mind and memory. Is he dreaming? Is he a resident patient living out traumatic visions of his own making? Given the heavy-handedness and DiCaprio’s limited subtlety, the foregone conclusions begin early. Too early. Based on Dennis Lehane’s 2003 eponymous novel.