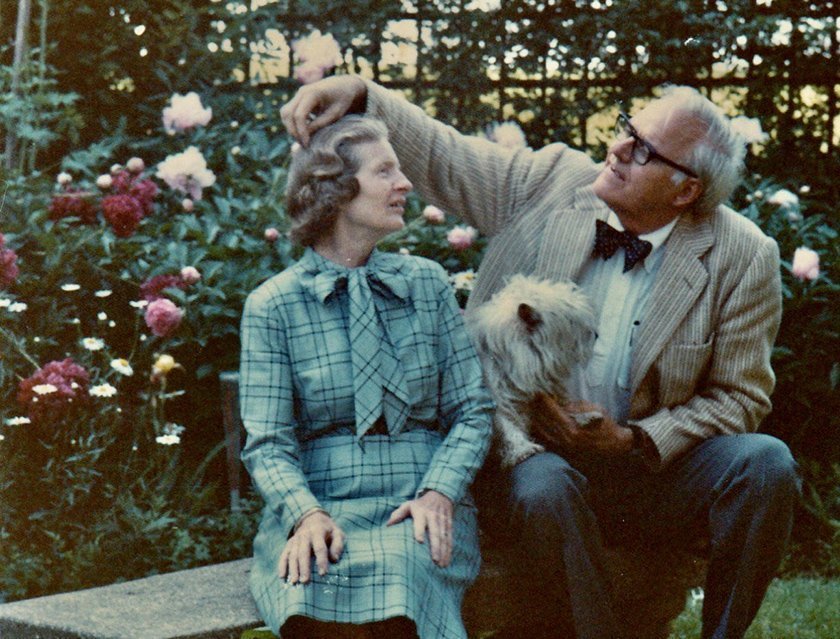 Columnist Madeleine Johnson's mother and father, along with their dog.
I

f I simply wrote about the ways that my parents embarrassed me, I would no longer struggle to find a monthly topic for this column. Neverending were my parents’ constant affronts to the expected norms of upper-class professionals, from my father’s driving a beat-up Volkswagen instead of a nicer car to my mother’s talking back to men who felt she owed them deference.

With age, I have come to respect and admire how they followed their beliefs and stood up for them.

Although I am not sure I have reproduced my parents’ courage in standing up to conformity, I believe — and my children would agree — that I have successfully reproduced the embarrassment. Sometimes almost to the letter. 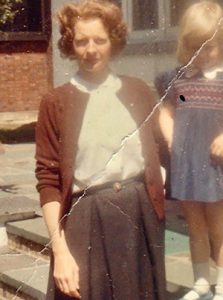 Madeleine Johnson as a little girl, pictured with her mother.

As a teenager, I used to cringe in anticipation of the comments from friends and neighbors about my mother’s obsession with “shoveling the walk.” I put that in quotation marks, because my mother did things to our front walk that were way more varied and sophisticated than the occasional removal of what the latest storm dumped.

Mom’s activity with shovel, ice breaker, and broom was a cyclical one that was Biblical in its seasonal rhythm and ritual. Early winter was fairly straightforward snow removal, accomplished with shovel and broom. It had its trying-to-paint-the-Golden-Gate-Bridge aspect in that the snow removal never really did get done. Another storm came, or snow would blow back over during the night.

In the spring, everything became more complicated and dangerous. Sunnier days led to a vicious cycle of daytime melting and nighttime freezing. Mom followed the sun as carefully as a Maya calendar maker. She’d rush outside to clean areas before dying light froze a recent melt into a mini ice-rink. Despite the risk the dog might escape, she’d even leave a gate open so the sun could dry the pavement that lay in its shadow. And she’d be out there chipping away at the ice wearing an old corduroy coat, a skirt, stockings, and L.L. Bean Ladies Cabin Boots.

“I’ve just got to get out there,” she would say, grabbing her shovel, broom and ice breaker.

Whenever my mother asked me to help, her passion for what seemed a tedious chore — for her — and an imposition — for me — inspired inward sighs and eyerolls.

But times change. “I’ve just got to get out there,” I hear myself saying almost daily now. When you have your own walkways to take care of, it all makes sense.

Breaking my leg a few years ago made me aware of the potential consequences of falling. In the icy clime where I live, I may well fall and break something again, but at least I can avoid it happening on my property.

My own sidewalk maintenance has revealed that this was not just an odious chore for my mother. Removing snow and ice is satisfying as any task where you can see concrete results. It can also be kind of fun.

When you have your own walkways to take care of, it all makes sense.

Remember the childhood pleasure of digging channels in the sand with your plastic shovel? Remember watching where the water went and enjoying how it destroyed your little dams? Well that’s what it feels like when you break up a patch of ice and dammed up water flows away. I can’t think of a thrill that is as harmless and easy as breaking off a huge chunk of ice with minimum force and maximum result.

There’s therapy too. I may not be able to take out a Russian tank, but I can express all the violence of my solidarity with Ukraine on the ice in my driveway.

Like my mother, I became a bit of a proselytizer. I have tenants who are apartment dwellers who moved here from a milder climate. They rolled their eyes inwardly whenever I warned them that they needed to keep up with the snow and ice on their steps. At first, they chipped and shoveled because it shut me up. Then they chipped and shoveled because they realized it was dangerous not to. Now they chip and shovel because they think it’s fun.