Shove-it (if you can) 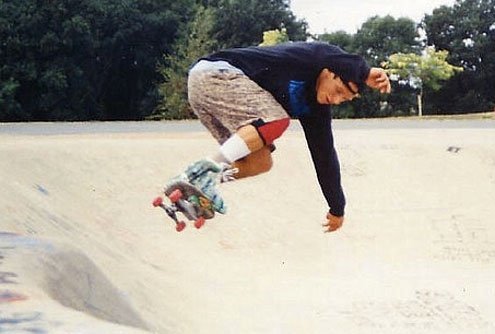 hould you ever happen on a copy of my eleventh-grade high school yearbook you will find a photo of me with longish hair, much of it knotted and gnarled in what suburban white kids called — somewhat presumptuously — “dreadlocks.” During high school I was part of a clique of skaters (“skate rats” to others). Our hair and clothes told the world all it needed to know.

Skating ruled our lives. It pervaded every moment of every day. I remember at breakfast mentally carving my cereal bowl as if it were viable skating terrain. We went out after school, on weekends, often pulling all-nighters in downtown Towson, a Baltimore suburb. We frequented odd places: a certain curb of a perfect height, a shopping center, and the stairwells outside an office building. We’d stay there for hours trying out new tricks, goading one another, and celebrating each other’s successes.

I’m still amazed at how we never grew bored of the most banal features of the urban landscape: parking lots, cement walls, a gracefully inclined sidewalk. The physical world was infinitely malleable; everything existed to be skated, tested, conquered. Fear set the only limits. The best skaters were those who could overcome the little voice of restraint in their head. “Don’t think, just go” was a mantra.

Inspired largely by videos of professional skateboarders, we listened to their music, bought the clothes they promoted, rode their signature boards. During the six or so years of my intense involvement with skating, I saw fashion and equipment change continually, as my own clothes grew progressively baggier. Boards in 1992 no longer resembled those from 1987. Today I’m struck by how similar the boards still are to those we rode two decades ago. But the tricks keep getting trickier.

While in earlier eras skating had been “sidewalk surfing,” by my day it was largely about mastering intricate little tricks. You learned to ollie, then to kickflip, then to do it off a curb and down some stairs. The same rule applied across the board: no matter how complicated the trick, you were urged to test it out in new ways, to push the boundaries. The language we spoke reflected our obsession with intricacies of the tricks. “Dude, did you see that backside nollie kickflip shove-it to manual over the island? Sick!” (See Skate Dictionary for what this means.).

My first skate hero was Natas Kaupas, whose first name spelled backwards was — inconveniently — “Satan.” In those days skaters were largely perceived as part and parcel of gangs of hoodlums, if not explicitly Satanists. We were out to rough up old ladies, destroy public property and create a nuisance everywhere we could. Our favorite spots were constantly being decorated with “No Skateboarding” signs. Running from security guards was a commonplace. Despite it all, we were having the time of our lives.

To quit skating was stigmatized by those who skated. If you didn’t see someone around for a few months, you might ask about him. Did he get a girlfriend? Go to college? Become a prep? We couldn’t imagine wanting to do anything else with our lives than skate. We’d shake our heads at the loss to our community, then move on to the next spot.

Most of us, however, did quit when we went to college. I skated for a few months afterwards, but something inside me had changed. Perhaps I wanted a girlfriend without dyed hair and a nose ring. Whatever the reason, I became an apostate. I began to be interested in other things, too: reading books, collecting albums, doing art. I also began to underplay my previous lifestyle. Over time, I became reluctant to admit I had once been a skater.

As I distanced myself from everything connected with skating, I never stopped thinking about it. To this day I don’t pass a set of stairs, a handrail or a marble bench without doing a few tricks in my mind. I still think, “I could make that” or “No way in hell!” When you’re that into something, it sticks with you. It’s become a silent obsession, one that I can feed effortlessly — and risk-free — on YouTube. It’s sobering to see what the kids are up to these days.

A few months ago a friend from high school began posting to Facebook about his return to skateboarding. He was having what he called a mid-life crisis, so he went out and bought a new board, found a quiet spot in Brooklyn to begin practicing, and even made friends with a few local kids. In his posts he worried that he might get hurt.

But as the weeks went by and he stuck with it, he began to relearn all his old tricks. The other day he wrote that he’d gone out to a skate-park in Canarsie. Hurricane Sandy had given him the day off. “This was the best decision I ever made,” he said.