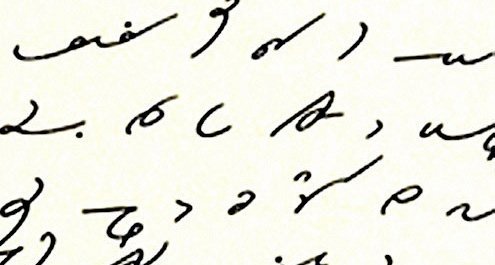 Midway through the motion, she’d smile. Shorthand, she told me proudly.
T

o me, the peculiarity of the present was in color. In magazines. On racks. The Hula-Hoop, Silly Putty, the little plastic GI with the limbs that bent backward. GI Joe.

But what the blonde did with her hands — how she transformed speech into cunning lisps of script — that was new and seditious. When my father dictated, she’d lick her fingertips and produce jerky hieroglyphs until the exhausted pages thickened at the spiral. Time for another notebook, and by then I’d have inhaled her breathing.

Midway through the motion, she’d smile. Shorthand, she told me proudly.

She mimed it — s-h-o-r-t-h-a-n-d — tapping at the pad for my sideshow benefit. It’s what you do in a hurry. When you have to. It’s all you need. That temporary prowess.

She was my father’s secretary. Her name was Freddie.

What you learn about making your mark depends on the company you keep. My father gave me a typewriter when I was 12. I pecked at the menacing keyboard from time to time, eventually gouging my right finger between the “o” and the “p.” An awkward band-aid camped on spot for weeks. You aren’t doing it right, my father barked, and I closed my eyes. I still don’t do it right.

The squiggles, the curls, the rawness of her scrawl, I watched and watched, front-loading my teenaged wow. She was probably after him — she, 30 years younger, impressionable; he, 30 years older, remote, separated. Why him and not me? Teens are outnumbered zealots; they could pulverize bone on a whim; or love forever. But only suddenly. On an exclusive whim. Hormones. Syndromes. Catalysts.

“I know how to hear him,” she whispered, pouting the “w” so her lips made an oval. Writing, she’d flick her hair or blow back bangs. She never spoke to my father. Nor did I. Not there.

I looked up the word “shorthand” and listened to how it sounded: geometric script quickened and splayed; a compromise of ellipses; a diagonal stenography; a non-alphabetic speed. Train a compliant hand and it can match velocity’s “real-time” cadence. You scrabble and compact to reassemble for sending or safekeeping.

But this was before real-time. Or so I prefer to think.

I think of Freddie when I see books and essays about the Web generation, usually highbrow howls about the strip-mining of a deeper intelligence. The collective ouch reads like satiric farewell to a paradise lost with no mention of a before.

Historian Stacy Schiff: “We read not in continuous narratives but by linkage, the movable type of the 21st century. Our appetites are gargantuan, our attention spans anorectic. Small wonder trivia is enjoying a renaissance.”

Novelist Walter Kirn, writing of the “link” tribe: “They’re born onstage, these creatures, and the first thing they see is the snout of Daddy’s Handycam. Their first steps, their first words, their first Little League at-bats are all directed toward the lens. In time, they have nothing inside them that hasn’t been outside. No depths. No interiors.”

But when did the indefinable “they” — the non-intellectuals creatures who inhabit most of the globe — not make inside from out? Who never aspired to Daddy’s Handycam, or its precursor: in cars, clothes, sexual identities built from a kit? Only now, interiors have more exteriors to choose from.

And trivia’s renaissance? OK, but tell me first about its Dark Ages. Tell me the online voyeurism that caresses “my”-this and “you”-that is unlinked to history’s album of vanity? Attention span was a charlatan before cyberspace subverted the caprice.

Being human is usually gargantuan and mostly indiscrete. You dish it out, take it, make a pitch, do it quickly, move on — “HURRY UP PLEASE IT’S TIME,” Eliot wrote in 1922. (And: “You ought to be ashamed, I said, to look so antique.”)

His may have been literature’s last best “please,” but modernity’s lark otherwise kicks around the same busy soundbite.

To learn Freddie, I probed her squiggles. To establish authority, I gossiped with myself and guessed the rest. My days depended on imagined trysts, and (no surprise) my attention span wavered. Already poor grades sank. The only depth and interior I knew of was my own torment, which I cursed to get history’s attention. The outcome of so much depth was to hear her giggle (once) and confide her feelings for my father.

And that — shockingly, to me — was that. The moveable type of the 21st century would have saved me the trouble, or not.

Very little. Lens or not, the Western clan is generally shy and conservative. Most of what’s inside still stays inside, fragile, with online exteriors everywhere because that’s contemporary cool’s shiniest shorthand. Trivia’s renaissance is just small-town gossip’s wireless extension.

Blogosphere or face-to-face, the peculiarity of the present is still cousin to commonplace, digital colors but colors still. You watch vanity mature, age, and finally dissipate. You hope someone notices the many ellipses you promote, the you of you, you think. That they’ll just examine the sentence, you hope. That they’ll maybe see between the brackets, you whisper.

But it’s no sure thing.