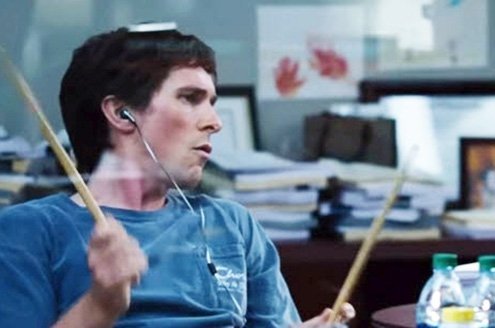 Christian Bale in Adam McKay's "The Big Short."
I

n 2008, the U.S. stock market, its major banks tied into layer upon layer of abhorrently rigged, give-away (or sub-prime) mortgages, collapsed into near-literal oblivion, torpedoing first the U.S. and later the global economy, leaving tens of thousands without homes, their savings wiped out. This by now is old news, if not the stuff of sad folklore. The story of Wall Street complicity in creating a financial structure based in part on interconnected, greed-driven loans has been the subject of many books and several fine films, including J.C. Chador’s “Margin Call,” which fiercely x-rayed the New York side, to Rahim Bahrani’s “99 Homes,” which examined Florida evictions and the human consequences.

Director Adam McKay’s acutely effective show-and-tell project takes a riskier, more expansive, comic relief approach. Using the story of hedge fund manager Michael Burry (Christian Bale) as a cue, it portrays the men who early on got a sense the mortgage game was a sham and bet against it, or shorted it.

In essence, these disparate players called Wall Street’s bluff, and were repaid by the best imaginable worst-case scenario: they were right. Though the smart-ass, hell’s boatman narration comes from make-a-buck bond salesman Jared Vennett (Ryan Goslin), the real propulsion is Burry, a socially maladroit San Jose former neurologist with Asperger’s and a glass eye who drums to heavy metal while mentally crunching numbers. In 2005, he deduces an alarming pattern of loans, basically a housing market skyscraper erected on wooden stilts. On parallel but converging tracks are trader Vennett, another hedge fund manager, Mark Baum (Steve Carrell), and start-up partners Charlie Geller (John Magaro) and Jamie Shipley (Finn Whitlock) who learn about Burry’s lunatic “wager” — betting billions against rated bonds — and suspend disbelief to join in.

That they’ll “win” in the end is a foregone occlusion, but McKay successfully gives his move an almost comic book-like, page-turner approach. He cleverly explains Wall Street’s often arcane language using jarring, oddball asides — chef Anthony Bourdin explains what a term means based on cooking. These skit-like snippets help make sense of the worst financial calamity in nearly a century, and the self-involved, laissez faire folly that nourished the too-big-to-fail myth. The effect is a bit like chronicling the rise of Apple and Microsoft, and its busybody founders, but in reverse, with characters used to build a panorama not of invention but of apocalyptic irresponsibility. It’s a satirical disaster movie without digitally wiped out cities whose wry strength is its willingness to nag Wall Street’s linguistic shell game until the rigged Braille becomes entirely legible, and terrifying.

The infinitely talented Bale shines as Burry, one of many near-madmen in this complex mosaic of players. Carrell’s equally brilliant Baum is by turn manic and sullen, a ferociously angry, system-hating broker who’s also sensitive to the growing moral wreckage around him. A panoply of supporting actors drive home the point Greek chorus style. Says Shipley: “The system fucked up in a big, big way here. And somehow we know before anyone else.” Indeed they do, but when the walls finally do come tumbling down, the damage is more extensive than that caused by 9/11 – and the winners are pyrrhic figures at best.

“Do you even know what you just did,” Ben Rickert (Brad Pitt), yet another player, asks enthusiast Charlie after they move up a notch to bet again AA-rated bonds, “You just bet against the American economy. If we’re right it means people lose homes, jobs, retirement savings, pensions.” They were awfully right. And both banks and ratings system were either ignorant or complicit.

Darkly enthusiastic, ironically fatalistic about future reform, “The Big Short” is a cautionary tale, perhaps the best of its kind given the sweep of its ambitions. It closes, almost perfectly, with Led Zeppelin’s menacing “When the Levee Breaks,” a musical choice that makes all too much sense. Based on Michael Lewis’ 2010 book of the same name, with the film changing only the names of the real-life characters.