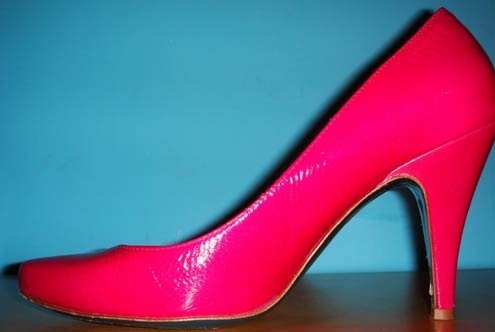 They're amazing, she sighed, "I have to try them on!"
S

ometimes all it takes is a 50 percent discount to awaken the senses. Nicoletta and Giovanni referred to each other as friends. Not that anyone here believes in such a thing, but they declared it in the face of a skeptical city.

They’d met during their last year at university, seated together in their marketing and communications class, and hit it off immediately. He was a soft-spoken Sardinian with four older sisters. He respected her ring-wearing status and kept their conversation as platonic as possible.

She simply assumed he was gay or simply uninterested, and took great pleasure in sharing her romantic woes and dragging him along on window-shopping sprees between classes.

This is not to say that her scent didn’t set his heart pounding, or that when her eyes clouded with tears he never fantasized about breaking her boyfriend’s legs.

They would laugh and discuss what exactly they would buy when they became millionaires, and move on to the next window. The few times she actually tried something on, they would stand together shyly in front of the mirror and scrutinize.

He was honest about what was too tight or too large, and looked away when it was just right, telling her it looked good, meaning that she was beautiful. Yet they always left empty handed and used up their college budget on red wine and pizza.

Five years later they met at a trade fair. They ditched their stands and expensed a long lunch, filling in the space of the last five years over red wine and four courses.

She noticed him staring at her ring-less finger and explained that in the end, she needed someone less provincial, and while she still felt light-headed in Flavio’s arms, she knew he wasn’t forever. She looked up at him, signaling that it was his turn to unwrap his heart for once.

Which is probably why they tapered off, she interrupted. Women crave devotion, and that starts with attention.

Giovanni smiled and asked her why she hadn’t been around to scold him sooner, and they planned to meet for lunch the following week.

They went to a small trattoria in the center where they sampled from each other’s plates of pasta — hers with eggplant, his carbonara — and marveled at the way they both ate by sliding a single prong of their forks into individual tubes of rigatoni, and how their plates subsequently turned cold, which was a pity, but that they couldn’t kick the habit.

They paid the bill and lingered on the doorstep of the restaurant.

Coffee? They spoke in unison.

As they made their way down the curling streets behind Campo de’ Fiori, she stopped to admire a pair of fuchsia heels by a Florentine designer that she’d never dared to desire.

Giovanni followed her into the store and busied himself with the four pairs of black patent-leather oxfords comprising the men’s department.

Nicoletta collapsed into a chair and reached up under her knee-length skirt to unroll her stay-up stockings. Giovanni felt his right eyeball pulsing in its socket as he stretched his peripheral vision to the limit. When his neck started cramping he gave up and sat two chairs down from her. Her calves were slim and tapered into delicate ankles. Her toenails were painted a chipped red. When the shoes arrived she arched her feet into them, and teetering a bit, stood up to look in the mirror. She pulled her skirt up past her knees and Giovanni glimpsed the backs of her thighs. The heel was so high that her Achilles tendon seemed to stretch halfway up her calves, leaving little grooves on either side of it. She clicked the rounded toes together and asked over her shoulder,

“What do you think?”

Giovanni checked his watch as she shuffled from one leg to the other. He hated the shoes for their audacity. They seemed to steal the glow from their wearer, and yet he also loved the shoes as a pedestal for her fragile beauty — in them she seemed to sprout up and blossom.

In that moment he wanted Nicoletta more than he had ever wanted any woman.

“Giovanni!” her voice was breathless in his ear, “They’re on sale!”

She insisted on wearing them out of the store, and grabbed his arm to steady herself on the cobblestones. He held her tightly around the waist as they walked, and when he could no longer bear it he grabbed her face and kissed her hard.

She gasped. Her eyes widened, but she didn’t struggle from his grip. Instead, she melted into it.