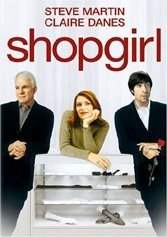 Clare Danes takes over Anand Tucker's movie based on the Steve Martin novella.

Anand Tucker cinematic version of Steve Martin’s eponymous novella showcases Claire Danes’ acting chops. She plays the shop clerk of the title to perfection, evoking the longing and insecurity that plague most young women in the seemingly-vast wasteland of adulthood that awaits them after graduation. Jason Schwartzman is equally strong as the obnoxious and listless goof who half-heartedly woos her. But Steve Martin is unconvincing as the older man, who provides her with sex and stability, but, ultimately, not love.