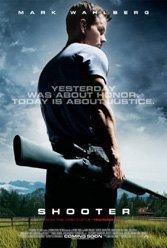 Antoine Fuqua’s “Training Day” produced a sleazy, scene-eating character (corrupt cop Alonzo, Denzel Washington) to bring audiences to heel. No such luck here. Stoic Mark Wahlberg is a former special forces sniper Bobby Lee Swagger who gets himself in trouble by trying to help out the FBI thwart a presidential assassination bid. There’s no good to be done, of course, since government is top-to-bottom corrupt. When Swagger is hung out to dry, he’s hell-bent on sharpshooting revenge (“I don’t think you understand how serious this is. They killed my dog.”) Off we go to the land of explosive incandescence.

Fuqua gets Danny Glover to look mean (a dubious effort, since Glover smiles so well) and drafts Ned Beatty, a nasty-ass Congressmen, to re-enact what he did brilliantly decades ago as Arthur Jensen in “Network”” — broadcast amoral greed (“There are no sides. There’s no Sunnis and Shiites. There’s no Democrats and Republicans. There’s only HAVES and HAVE-NOTS…”) The movie’s dearth of ideas is occasionally compensated for by Wahlberg, who is undeniably fun to watch. But it all finally sinks first into implausibility, then absurdity, and finally embarrassment.