Shoot Me In The Dark 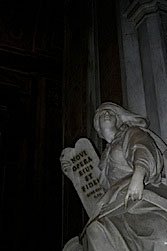 These two photos of the Madonna and scripture (in the monument to Pope Gregory XIII) were shot inside St. Peter’s on a rainy day with a Canon Digital Rebel XT equipped with an EF 28-135mm f/3.5-5.6 IS USM Standard Zoom Lens.
S

o you want to take exquisite photographs of all you see in Italy, images that evoke the surge of emotions as you meticulously compose each shot, fingers tingling with anticipation, eyes twinkling with glee, head giddy with your newfound photographic genius; Ansel Adams be damned.

Unfortunately, it’s not happening. Half of your Italian shots are flashed out or blurry — and half of everything you see is in dark and gloomy churches. It’s inevitable, but that’s no consolation.

Yet there’s hope if you’re willing to think twice about your approach to taking photographs.

Italy swarms with low-light settings: basilicas, catacombs, crannies inside temples. In such situations, the ubiquitous handheld digital camera, while handy, won’t save you. So what’s the solution?

Step No. 1 is to consider an upgrade. Entry-level digital SLRs (Single Lens Reflex Camera) are perfect for casual photographers looking to improve on quality. They hardly cost more than digital handhelds and give you a precious ingredient: control. Photography, after all, is nothing more than trapping light in a box, and the digital SLR lets you to manipulate light as you please.

The digital SLR, like its film-based predecessors, has a manual mode that allows unlimited authority over compositions. The manual mode controls shutter speed and aperture, two-thirds of a photograph’s mix. Shutter speed determines how long the camera sucks in light. It usually ranges from 1/4,000 of a second to 30 seconds.

Aperture determines how much light is in focus. You can focus on a single rosary bead or the entire Sistine Chapel. But the sharper the focus, the more time the camera needs to collect light. The process slows shutter speeds and causes problems in the dark. These variables, in conjunction with light sensitivity sensors (ISO), make or break every photograph you take.

The ISO (International Organization for Standardization) designates film speed. It determines how hard your camera works to gather light. Most digital handheld cameras manufactured before 2006 have stunted light sensitivity sensors, which helps explain why church shots taken without flash are blurry. On the digital SLR and more recent digital handhelds you choose the light sensitivity levels: 100, 200, 400, 800 or 1600. These options are essential to shooting in the dark.

Think of the ISO as the commander of an anti-light Black Ops unit. To capture more light, he dispatches more troops; 800 if it’s rough going, 1,600 if it’s really hairy. But by sending reinforcements the commander also runs the risk of generating more riffraff — or light. And that’s just what happens when you take pictures at high ISO levels (800, 1600). The riffraff in this case produces grain. But at normal printing sizes — what you’d put into a photo album — grain is nearly imperceptible. Also, ever-advancing digital technology is making “grain-infected” light a thing of the past.

Why so much talk about light-gathering? Because no one can stand absolutely still.

You enter a church and choose a shot. You then decide how much of the frame you want in focus by selecting the correct aperture (small number — small focus, big number —big focus). Now it’s time for the shutter speed. The correct shutter speed is determined by available light: You must match shutter speed to the amount of light the camera is “seeing.” Here’s where you run into problems in the dark. If the camera isn’t seeing much light, it will tell you it needs five seconds (for example) to suck in all the light from the scene. But you can’t stand perfectly still for five seconds. A quarter of a second is more like it. This is when you bump up the ISO. First, check the light. If the camera indicates a managable amout of time, shoot the shot. If not, bump up the ISO again. If this fails, drop the aperture to a smaller focus area.

And if this fails (it rarely will), try using a tripod. And if things get really dire, remember you still have one more screen where you can stamp a beautiful image: the mental one called memory. Finally, consider picking up Bryan Peterson’s “Understanding Exposure: How to Shoot Great Photographs with a Film or Digital Camera,” a detailed overview of the points covered above.

Digital vs. Film A digital camera is an apprentice’s dream. If the shot’s no good, take it again. There’s no film to buy, no processing fee. In the dark, you can immediately see blurring — just remember to zoom in. Plus, software allows you to adjust the ISO, impossible with film cameras (where film itself determines ISO).

Mr. Flash Flash is not an option, even if the church tells you otherwise. He’s an impostor. High ISO levels are important because Mr. Flash gives you fake light in real situations. Shadows vanish, color washes out, focus falters, depth vanishes. Mr. Flash fabricates the scene — and can also ruin antiquities over time, hence the no-flash rule in churches.

Until 2006, handheld digital cameras had an automatic ISO of up to 800 (the average was around 400), inadequate for church photography and the reason for makeshift tripods.