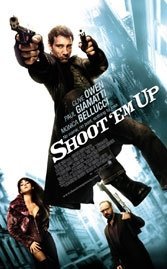 Michael Davis’s gunplay parody by way of Guy Ritchie and Quentin Tarentino is a orgiastic Absurdistan for the digital generation. Visually, it’s 80 minutes of kinky sadism with sundae scoops of noir, Gothic and touches of retro (check out diner and bus). Verbally, it’s a nonstop shellacking of gag me one-liners. The movie allegedly stars Clive Owen, Monica Bellucci and Paul Giamatti, though each is a sloppy slave to cartoon bubble-talk.

Silent-type, carrot-munching gun-meister Mr. Smith (Owen) is roused from innocent-bystander slumber when a pregnant woman is chased down in a dark alley (when is an alley not dark?). Smith kills the bad guy, delivers her baby and shoots off the umbilical chord in the first of several hundred unusual anatomical feats. When master bad guy Hertz (Giamatti) comes after him, all Hell of the “Fuck you, fucker” kind breaks loose. Turns out a presidential candidate backed by a taxidermist gun-maker needs the baby for sinister reasons. Enter hooker/wet nurse/play-mom Donna Quintano (Bellucci) who between blow jobs, climaxes and Italian obscenities tells Smith, “You’re the angriest man in the world.” Duh. Meanwhile, Baby Oliver digs heavy metal.

Credit Davis for picking Giamatti, whose over-the-top grimacing keeps the comedic side alive. But even at full throttle lampooning requires some connective tissue, which usually means caricatures alive and awake enough to make their surgically enhanced surroundings engaging. Such protocol doesn’t interest American writer-director Davis. Sure, the always-likable Owen has his moments (“I’m a British nanny, and I’m dangerous…”), but they run out of steam after 15 minutes. The hopelessly miscast and never funny Bellucci is a disaster. Where’s Lock, Stock and Wit when you need it most?